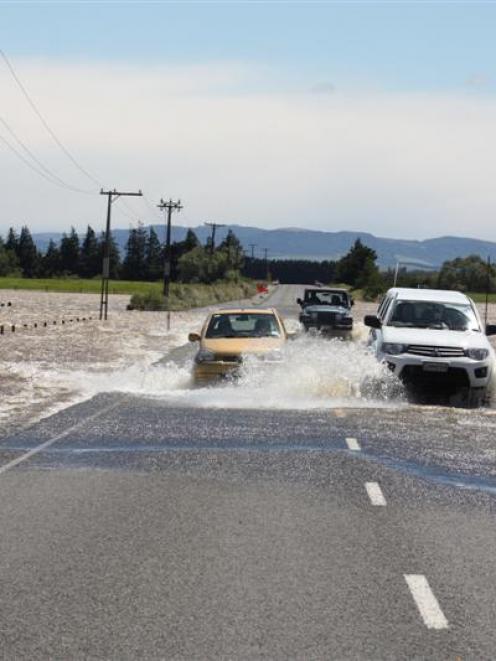 Vehicles negotiate flooding on the Rakahouka-Hedgehope Rd, about 5km south of Hedgehope, where the Titipua and College Streams overflowed yesterday. Photo by Allison Rudd.
Southern authorities are warning motorists to take care today as swollen rivers peak in Southland.

The rain has stopped in the headwaters, but peak flows will still be moving downstream today.

The flooding - the second event in nine days - was caused by rainfall of up to 200mm in Fiordland and 40mm-90mm across all Southland river catchments over about 18 hours on Wednesday and early yesterday morning.

Hedgehope dairy farm worker Mark McKee said the road was dry when he went to work at 8am yesterday but was flooded when he returned home for lunch.

The Milford Track, which was closed on Wednesday morning, reopened yesterday.

The storm, which brought with it 22mm of rain an hour, peaked between 9pm and midnight on Wednesday night, Department of Conservation spokeswoman Annie Wallace said.

Widespread flooding washed out sections of the track.

All walkers on the Kepler Track managed to traverse the alpine section of the track on Wednesday, despite high winds, Ms Wallace said.

The Routeburn Track is closed at the Lake Mackenzie outlet midway through the track because of flooding, but Ms Wallace said trampers could still go on to the track at either end, as long as returned the same way until flooding subsided.