Winning creation a case of less is more, judge says 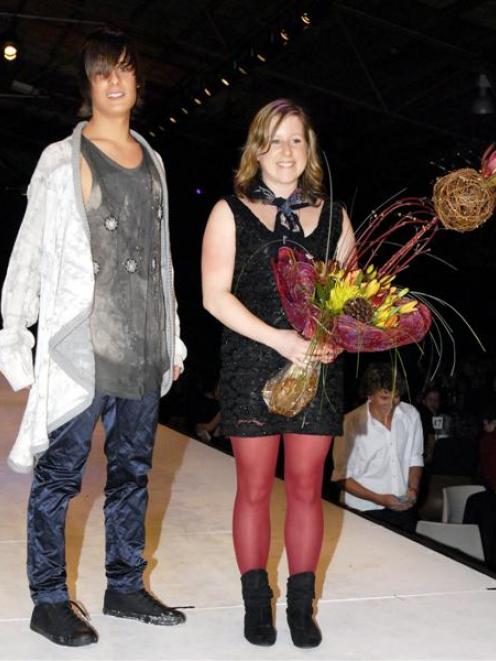 Dunedin designer Laura Marshall (21) won The Ensign Award of Excellence at the gala awards night on Saturday at the Gore Town and Country Club Stadium, with a design inspired by box jellyfish.

‘‘The winning garment would have shocked a lot of people. It was a little bit of a plain Jane or rather John,'' Hooper said.

‘‘It was actually a case of less is more; it was hot, searing fashion,'' he said.

There were other section winners that were more colourful and deserved their placings, but the winner was a cut above the rest, Hooper said.

The design was subtle yet masculine and Hooper said he wished the audience could examine the winning garments close up so they could appreciate the perfection of the work.

Hooper said the design was very avantgarde but, above all, to be a winner the garment had to be well made.

The judges were so taken with the design, Turnbull wanted to buy the winning entry. However, he was told by Marshall it was already sold.

Hooper said the fact the garments had been pre-sold showed the designer was a forward thinker.

Marshall was overwhelmed when her design was named the winner. She described the accolade as ‘‘unreal''.

This was not the first time Marshall, who graduated from Otago Polytechnic last year and now works for Company of Strangers in Dunedin, had entered the Hokonui Fashion Design Awards. Last year she won the denim section.

She was drawn to designing clothes for men. The women's design field was ‘‘very competitive''.

‘‘I'm not a very competitive person,'' she said.

There were not many menswear designers working in New Zealand, she said. Her ultimate goal was to launch her own fashion label.

It was not only those from the fashion industry who appreciated the creations on the catwalk at the gala night. Members of the audience were also impressed.
First-time attendee Nathan Dickson, of Mataura, described the show as ‘‘absolutely amazing''.
He was especially impressed when he considered that the majority of the garments were designed by students.
Mataura Licensing Trust representative Kate Leebody said each year the show just kept getting bigger and better than the last.
Ms Leebody said she wished they had more fashion for larger sizes.
This year's awards attracted a record number of entries, executive producer Heater Paterson said.
In all, 298 garments were submitted with 250 making it to the catwalk at the Gore Town and Country Club Stadium on Saturday night to be seen by a nearcapacity audience.