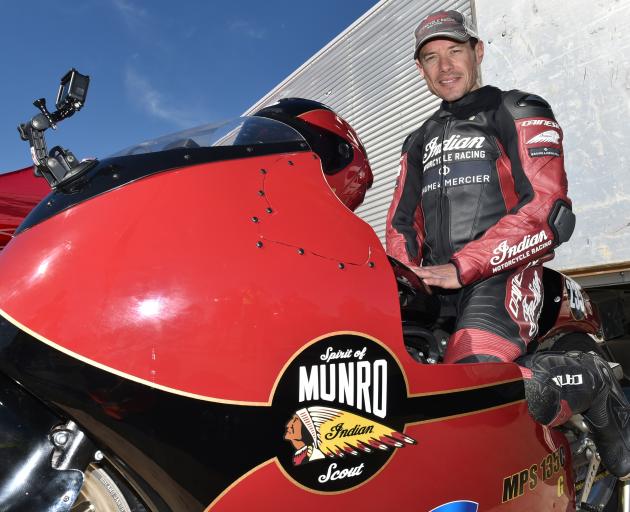 Burt Munro’s great-nephew Lee Munro, astride Spirit of Munro, a record attempt bike that went to the Bonneville Salt Flats in 2017. Photo: Gregor Richardson
The son of Burt Munro says the support for the annual challenge honouring his father continues to amaze him and his family.

John Munro said his father would be thrilled with the attention the Burt Munro Challenge receives every year.

"As a family, we just can’t believe that this tribute is thousands of people turning out as a tribute to our father. He would have never believed that this support would be the result."

He said he had met many people around the world who had been inspired by his father’s legacy,  as well as the film  The World’s Fastest Indian, which told his story.

"We’ve travelled quite a bit since the film was released, to various events around the world. One of the things that strikes me always is the number of people who have become inspired by dad’s efforts after seeing the film ... people have just been inspired to test their own capability. I think that is dad’s main legacy."

Mr Munro was one of thousands of people at the beach racing event at Oreti Beach in Invercargill yesterday under clear blue skies.

Seven categories showcased a wide variety of bikes and riders, and the star attraction was the Spirit Of Munro Indian Scout, ridden by Burt’s great-nephew Lee.

"We’ve probably got a couple of thousand people here already. The weather is good. You just can’t get any better."

He said the challenge was the biggest motorsport event in Southland and one of the biggest in New Zealand.

"There’s nowhere you can go and do a rally and go to so much racing at the same time."

The Burt Munro Challenge continues today with sprint races at Teretonga Park and an event at Oreti Park Speedway, before concluding tomorrow with the Invercargill street race.