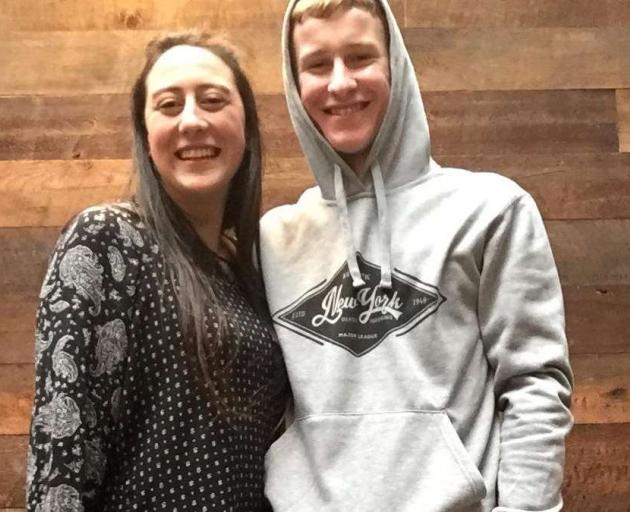 Shaun Hattrill and Nicola Henare were killed in the single vehicle crash south of Mataura on State Highway 1. Photo: Supplied/Facebook
A young couple who died in a car crash in Southland on Sunday have been described as role models in their community.

Police this morning confirmed Shaun Hattrill (21) and Nicola Henare (19), both of Mataura, were killed in the single-vehicle crash south of Mataura on State Highway 1.

The crash, shortly after 5pm on Sunday, left two others injured — one seriously, one moderately.

Mr Mills said she had recently started coaching and officiating at matches.

He had coached her for a number of years when she played as a representative for Southern teams.

"She was a real personality. We are deeply sad for all her family. She had her whole life ahead of her.  She was a great young kid. It is just a very sad situation."

Others also paid tribute to her partner.

Pukerau Rugby Club coach Peter Muir, who had coached  Mr Hattrill, described him as a "very committed player" who took the sport "right to the limits of the law".

"His heart was always in the right spot for rugby. He loved the game, loved his fellow players. He was very protective of the younger guys on the team."

Mr Hattrill really looked after Mr Muir's son who had started playing a few years ago.

"Shaun was sort of a guardian of him, my son was very sad to hear it [the news]."

Mr Muir described him as a "down-to-earth Kiwi boy" who lived life to the fullest.

He had also spent time working for his shearing company.

"He was a good worker and never moaned about work or when things didn’t go to plan, he just got on with it."

Outside of sport and work, Mr Hattrill was incredibly close with his partner, he said.

"He was really, really loyal to his partner Nicola. They were thick as thieves, if you saw one you saw the other, they weren’t ever too far apart."

Mr Muir said the rugby club would really miss him.

The investigation into the crash is ongoing.

Yesterday a media spokesperson confirmed the pair were seated in the back of the vehicle.

The driver of the car, a Holden Commodore, was seriously injured and flown to Dunedin Hospital, the spokesperson said.

The front seat passenger suffered moderate injuries and was taken to Southland Hospital by ambulance.

As part of their inquiries, police said they were were speaking to the driver of a second car, a red Subaru Impreza station wagon.

Although the car was not directly involved in the crash, initial indications suggested it could be linked, police said.

"Police would like to hear from anyone who saw this car — and the car that crashed — a dark blue Holden Commodore - in the time leading up to the crash.

"The cars are believed to have travelled south through Mataura and Gore prior to the crash."

Police wanted to thank those who stopped and provided assistance to those involved.