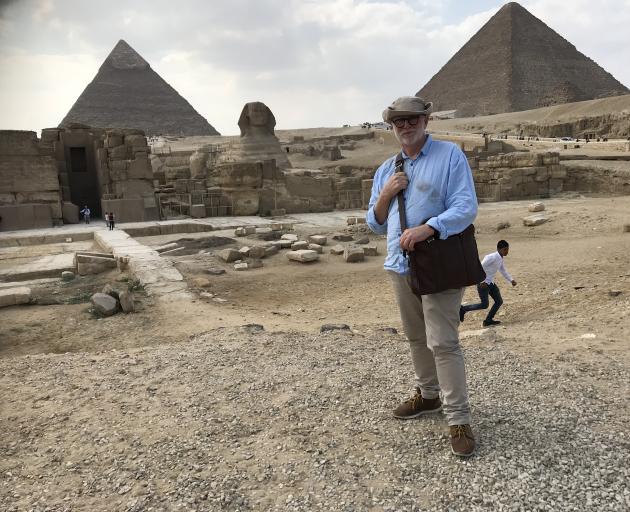 Author Tom Scott in Egypt following the footsteps of war hero Charles Upham, the subject of his new book Searching for Charlie. PHOTO: SUPPLIED
Political cartoonist and satirist turned author Tom Scott is travelling across Otago to promote his new book on a World War 2 hero.

Searching for Charlie is an attempt to separate the man from the myth and reveal the true character of Victoria Cross and Bar recipient Captain Charles Upham.

It has been compiled with support from friends, family and former comrades of the man, who won such fame for his bravery his old foes paid for a death notice in his home newspaper when he died.

Scott said he wanted his book to complement Mark of the Lion: The Story of Charles Upham VC and Bar, written by Ken Sandford in 1962 with the reluctant permission of Upham.

He first read the book as a schoolboy and begins his own account of the war hero by heaping praise on the original biography.

"Ken Sandford did a brilliant job, but he never went to Europe or North Africa and I thought, well, that is all untouched, plus he didn’t do Charlie’s childhood in great detail or his life after the war."

In his book Scott, who gained fame for his satirical sideswipes at former prime minister Robert Muldoon, also recounts his own family’s move to New Zealand.

His father moved the family from the UK after being impressed by the egalitarian morals of Kiwi soldiers he met while he was stationed in Germany.

Scott said it was that same sense of fairness and moral rectitude he found in Upham.

"I think it is because he was bullied as a little kid in school ... The boys were allowed to cane — can you believe that?"

Upham had earned the nickname "pug", short for pugnacious, for standing up to bullies and in Nazi Germany he saw the biggest bully of all.

The soldier was also influenced by his good-natured uncle, who looked after people suffering from leprosy in Lyttelton, outside Christchurch.

Scott said readers of his book would learn that Upham was not a psychopath, but a calculated risk taker who was brave but also lucky.

Scott spoke at the Brydone Hotel in Oamaru yesterday and is due to speak at Toitu Otago Settlers Museum tonight at 7pm, at the Invercargill RSA at 7pm tomorrow and at the Queenstown Contemporary Art Gallery on Friday as part of the Queenstown Writers Festival.