0 Comments
A spa pool, cakes and sausages were in hot demand on the lakefront yesterday as Wanaka waterskiers, wakeboarders and swimmers celebrated the winter solstice.

About 200 people took part in the charity fundraiser, some adding colour by donning fancy dress while others just wore togs or wetsuits.

Co-organisers Gary Tweedie and Graeme Vallance said it was the 21st year they had run the annual midwinter dip.

Various charities have benefited from the event over the years. This year the Wanaka Foodbank would be the recipient of the donations, Mr Tweedie said. 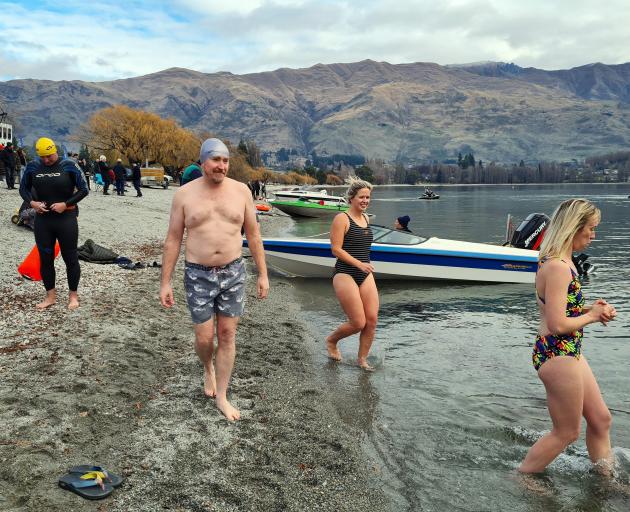 Swimmers head for the lake at the Wanaka midwinter fundraiser for the Wanaka Foodbank yesterday. PHOTO: MARJORIE COOK
The lake temperature was 10.8degC, which was warmer than the air temperature of 7degC.

Several other Wanaka organisations were interviewed by the Australian media outfit during a three-hour live cross to audiences across the Tasman.

Presenter Richard Wilkins then gave the swimmers his birthday cake, made by Lake Hawea business White Rabbit Cakes, which was shared with the public during yesterday’s fundraising dip.

Co-presenter Leila McKinnon declared she was impressed with Ms Phillips’ willingness to get in the water.

‘‘You could not pay me enough to do that,’’ Ms McKinnon said.

Ms Phillips said it was warmer in the lake than out.