By Mark Price
0 Comments
Planes were taking off and landing at Wanaka Airport yesterday, but it was a far from normal scene.

Anyone in the air just north of the airport could see the burnt-out Hughes 500 helicopter from Thursday’s crash, and a large team of police and crash investigators scouring the ground for clues as to why it crashed. 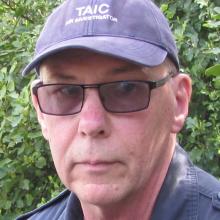 Barry Stephenson
The victims were officially named by police yesterday as the pilot, Nick Wallis, a director of Alpine Helicopters, of Wanaka, and Doc senior rangers Paul Hondelink and Scott Theobald, both of Twizel.

Public tributes were paid by family, friends and former colleagues.

Otago Lakes area commander Inspector Olaf Jensen said police had recovered the bodies of the three victims and they had been taken to Christchurch for postmortems.

"Following the recovery of the victims, a blessing was held at the scene with family, friends, colleagues, community leaders and emergency services present," Insp Jensen said.

Mr Stephenson said his team was focused on protecting and recording the crash scene, spread over about a kilometre of farmland.

He described it as a "big jigsaw".

"We have found pieces in different places and we just have to figure out how they got there and put it all together again."

The helicopter was enroute to the West Coast to begin a tahr cull and Mr Stephenson said investigators had found "significant amounts of ammunition away from the wreckage".

The tail section of the helicopter is also more than 100m from the main wreckage.

Witnesses, including those in two aircraft, would be interviewed, and Mr Stephenson said investigators "may seek to secure electronic, maintenance records and documents related to the operating company and key personnel".

He said the helicopter was leased to Alpine Helicopters by Airwork Holdings Ltd.

It was not new and had "quite a few thousand hours" of operational time.

Mr Stephenson hoped to complete the investigation in about a year but said an interim report or urgent safety recommendations "may be issued at any time if warranted".

Asked if foul play was a possibility - because of the helicopter’s involvement in the tahr cull - Southern district commander Superintendent Paul Basham said "it would be a normal consideration in any investigation, but I would say and stress at this point, it is only a consideration.

"There’s nothing to suggest at this stage that that machine has been the subject of foul play."