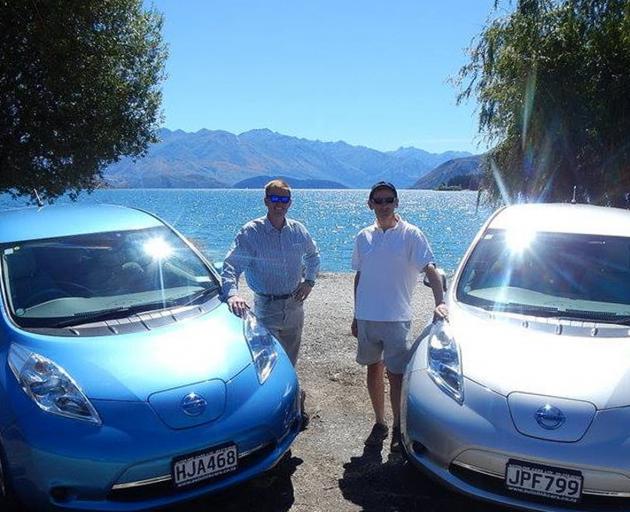 Wanaka Electric Vehicle Club members Morgan Knoesen and Mark Simmonds pushing for a fast-charging station for Wanaka. PHOTO: SUPPLIED
Waimate  has one, Timaru has one and Dunedin has two.

It's time Wanaka had one, too.

That is the view of the Wanaka Electric Vehicle Club pressing for a fast-charging station for the town to encourage more motorists to make the switch from petrol and diesel.

Co-ordinator Morgan Knoesen, who is promoting International Drive Electric Week in Wanaka this week, said yesterday a fast-charging station would cost about $8000 and it was the responsibility of the Queenstown Lakes District Council to provide one.

Communications manager Michele Poole said yesterday the council did not have a fast-charging station in its budget. However, the club could make a submission to next year's draft annual plan and ask to have it included, Ms Poole said.

The plan will be out for consultation in March or April next year.

Mr Knoesen said candidates for seats on the council had reacted positively to the idea of the council providing a fast-charging station, which he believed should be positioned either next to the children's playground on the lakeshore or near the Wanaka Yacht Club.

The electric vehicle club has 13 members, with eight electric cars, and aimed to have 12 cars by the end of the year.

Mr Knoesen said powering a car with electricity was one-sixth the cost of petrol and concern about the range of electric cars was also diminishing.

The latest electric Nissan Leaf was capable of travelling 200km between charges, compared with 90km for older models.

The arrival of the new Leaf had triggered a ``massive drop'' in the price of the older models, Mr Knoesen said.

He was predicting the price of batteries would drop by two-thirds in 2018, once American electric car company Tesla got its huge Nevada lithium battery factory into production.

As part of drive electric week, the club has arranged for the screening of the movie Revenge of the Electric Car, at the Paradiso Cinema on Wednesday, a vehicle display at the produce market on Thursday and rides for the public from the dinosaur park on Friday morning.

You don't see many horse troughs around Wanaka or Queenstown any more. I'll bet there are more than 8 horses being ridden around Wanaka. Should council put in free facilities for them too? And if I decide to walk to work should council provide me free water and a feed? Nope because that is just silly.

Why on earth does any council have to provide recharge facilities to this bunch. If the owners of a 8 cars want to have a (free?) recharge station then they should pay for it. They can then charge the hordes of electric vehicle tourists to use their facilities. Its called a commercial economy - you want it, you pay for it.

There is absolutely no reason why other ratepayers should subsidise these people hobbies.

First, the charger is free. The ratepayers don't pay for it. The council simply has to allocate two car parking slots. Chargenet will put in the charger and user pays. Second, why on earth would you want to back the existing petrol/diesel setup. That costs New Zealanders $2Bn per year in fuel costs that we send the the Middle East, and $380m in healthcare due to harm from pollution, and circa $2Bn of environmental damage! Electric cars will be in the majority within a decade or so, and its likely Petrol cars will stop being sold within that timescale too. If you don't believe that, check what is happening in Europe where Germany is pushing for a ban already... Electric cars are 5x cheaper to run, significantly quicker and more fun to drive, quiet, and they don't trash the environment. You can get one now in a new dealership or a good second hand car dealer in Dunedin. I guess you just didn't realise the cost of harm you car does huh? and like many you probably haven't noticed how many cars around you are already electric.