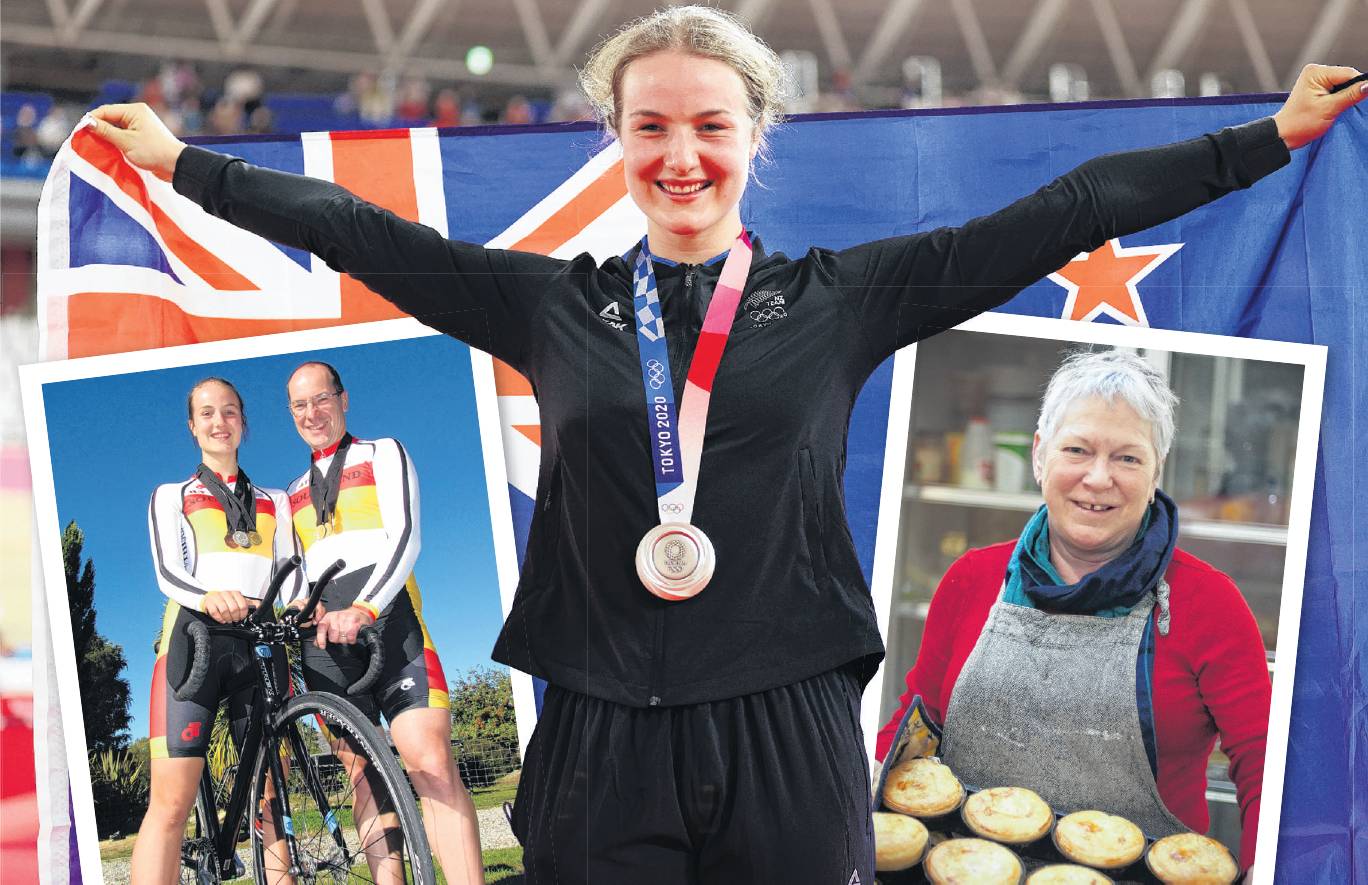 Ellesse Andrews had her first taste of cycling success growing up in Wanaka and in 2014 joined her father Jon (left),in taking home a medal haul at the national track cycling championships in Invercargill that year. To celebrate her success, Andrews’ step-aunt, Susan Rowsell, offered the chance to eat for free at Alexandra eatery Eat Humble Pie. PHOTOS: GETTY IMAGES, ODT FILES, & SHANNON THOMSON
There were tears in Pisa Moorings, near Cromwell, on Thursday night as outsider Ellesse Andrews claimed a silver medal in the women’s keirin cycling at Tokyo 2020.

The 21-year-old’s first indications of cycling potential came early, as she was growing up in Wanaka and attending Mount Aspiring College.

On Thursday night she came from the back of the field, making her way to the final via the repechage.

Step-aunt Susan Rowsell said that made the win all the more special.

Andrews delivered in the final two laps to claim silver, 0.061 of a second behind Dutch rider Shanne Braspennincx.

‘‘It was amazing, ants-in-your-pants stuff. I was almost too scared to watch.’’

She described her niece as just a ‘‘beautiful young lady’’.

It was that steely side that had helped her on the Olympic stage, Mrs Rowsell said.

‘‘I’m just blown away and so immensely proud of her.’’

There was not a dry eye in the house as the trio watched Andrews receive her medal on the dias, she said.

That pride continued yesterday at Mrs Rowsell’s popular central Alexandra eatery Eat Humble Pie. Mrs Rowsell was in a giving mood, offering customers the chance to eat for free if they named the event Andrews won silver in and then rolled a dice to get a three or a six.

The roll of the dice went against most customers until about 4pm when a Dunstan High School pupil rolled a three, earning him a free after-school pie.

Rob Inkster, a former Wanaka club captain for the Central Otago Wakatipu Cycle Club, recalled an occasion 10 years ago when Andrews took on a group of adult cyclists at the Invercargill Velodrome.

He believed it was Andrews’ first trip — or at least one of her first trips — to a velodrome.

‘‘When she was 11, she came down to the velodrome with us. Even at 11 years old, you could see her potential,’’ Mr Inkster said.

‘‘This is her DNA, literally and figuratively, as we saw of her in club races in Central Otago Wakatipu in her teens.’’

Her emotive interview displayed that, he said.

‘‘What a stellar performance Ellesse. You are an inspiration,’’ Mr Hammington said.

Andrews represented Mount Aspiring College and her club in road cycling events and worked her way up through the New Zealand junior representative ranks in road and track disciplines.

She began competing internationally from the age of about 16.

‘‘Many staff at the college remember her and her family, and how hard she has worked to become a top cyclist. It was great to see her celebrate her success and achievement at the end of her race yesterday.

‘‘It was very proudly talked about at our staff meeting this morning. From Mount Aspiring College we congratulate Ellesse on her success.’’

Mr Andrews was recently appointed the new sprint development coach at the Queensland Academy of Sport.