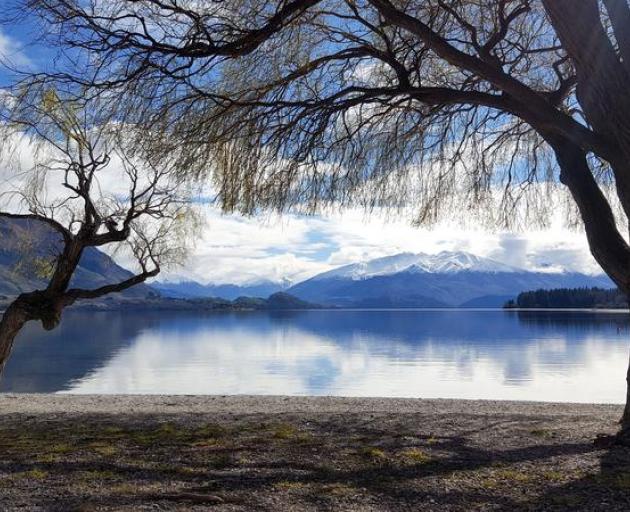 Wānaka. Photo: RNZ / Tess Brunton
A top lawyer acting for the son of a high-ranking public official and his partner, accused of flouting Covid-19 laws by fleeing Auckland for Wanaka argued for suppression to protect them from a social media mob.

The pair have attracted the ire of the New Zealand public after police accused them of a "calculated and deliberate flouting of the alert level 4 restrictions".

Last Thursday, the couple allegedly used their essential worker exemptions to pass checkpoints and leave the locked down Super City, driving to Hamilton, before boarding a flight to Queenstown via Wellington. After arriving in Central Otago, police said the couple then rented a vehicle and drove to Wanaka.

The duo are yet to be charged by police but have hired Rachael Reed QC, a leading Auckland criminal lawyer, to represent them.

Yesterday afternoon, Reed asked the District Court to suppress the identities of her clients from publication and the identity of the man's parent, who is a high-ranking public official, before their first court appearance.

In support of her application, Reed also filed copies of social media posts and blogs.

She argued that although mainstream media might be expected to act responsibly and await the first court appearance, the same could not be said of bloggers and social media advocates.

Robert Stewart, acting for the Herald's publisher NZME, Stuff and Radio NZ, said it would be "unwise" of his clients to publish the identities of the accused given they were on notice that an application for suppression of name would be made.

Reed also noted the Court of Appeal decision in the case of the Labour Party summer camp assault accused, who was granted permanent name suppression last year. The young man's identity was hidden forever, in part, because of the "potential hardship caused by the pernicious, judgmental, exponential, indelible and often ill-informed publication on social media platforms".

Judge Davidson ultimately granted suppression for the Wanaka pair, but he had concerns.

"The alleged incident has attracted considerable mainstream and social media attention," he said in his written judgment, released to media this morning.

He also said he had doubts about the District Court's jurisdiction to make pre-charge suppression orders.

The charges, if laid, against the couple will allege breaches of the Covid-19 Public Health Response (Alert Level Requirements) Order (No 11) 2021, the judgment indicated.

"At first blush, as I indicated to the registrar and counsel in the teleconference, I would have no power to make such orders," Judge Davidson said. "My powers are statutorily based, supplemented by such implied or incidental powers necessary to give effect to those."

The Criminal Procedure Act 2011, which governs suppression in criminal cases, clearly contemplates the powers of the law are only engaged when a person is "charged with" an offence or make a "first appearance" in court, the judge added.

"The issue is one of jurisdiction, not merit. As I have noted my preliminary view, in the limited time available to me and without full argument of the matter, was that I did not have jurisdiction," he said.

"However, it must be at least arguable that the District Court does have jurisdiction under its incidental and implied powers, to make such orders."

Relevant factors, he continued, would be the imminence or otherwise of charges, any delay in first appearance and the judge's sense or gauge of any adverse media, especially social media, reaction.

Crown lawyer Ned Fletcher, acting for the police, had also noted because of the alert level 4 court restrictions in Auckland, there might be a delay in filing charges against the pair or their first appearance in court.

Judge Davidson ruled: "In those circumstances I therefore made the orders sought on a pre-charge basis, prohibiting publication and the names and other identifying details of either prospective defendant and the connected person."

He further explained the order was to allow the duo and the high-ranking public official the opportunity to apply to the High Court for non-publication orders on a pre-charge basis.

"The orders will expire at 7pm tonight on the basis Ms Reed QC will apply to the High Court, which clearly has the necessary inherent jurisdiction to deal with the matter."