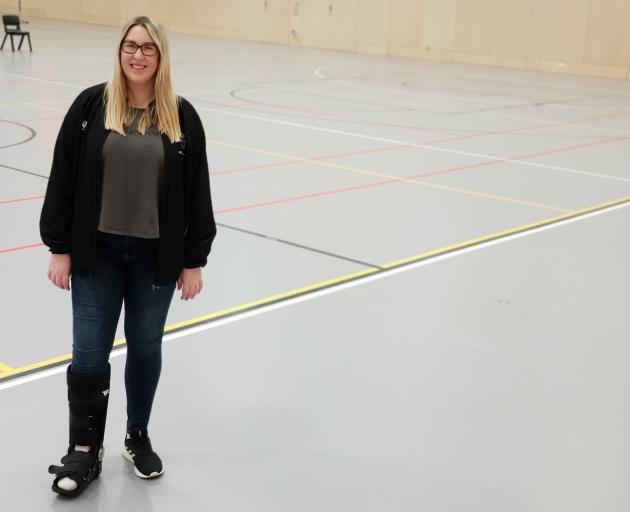 After coming down hard while playing netball at the Wanaka Recreation Centre in April, Laura Hay broke her arm and tow bones in her leg, keeping her off work for two months. Photo: Sean Nugent
The floor surface of Wanaka's popular recreation centre looks set to remain as is, despite some believing it to be the cause of scores of injuries.

Opened in 2016, the centre was designed for multi-purpose use - both sports and non-sporting events.

Queenstown Lakes District Council spokesman Sam White said for that reason, the floor surface, which was made of polyurethane, rubber, and polymer on top of a concrete base, was chosen ahead of a traditional wooden sprung floor.

The surface is similar to that of the tennis courts at Melbourne Park, home of the Australian Open.

But some people believe the Wanaka floor's firmness is to blame for a series of injuries suffered at the centre.

A Netball Upper Clutha committee member and player, who wished to remain anonymous, said they received an achilles injury because of the floor, and believed other people's injuries were related to the floor as well.

"There's far too many ankle and other injuries.

"We have lost four players from our team due to that floor. I watched a girl go down two weeks ago with a concussion."

"It's every week, and compared to Christchurch facilities, it's not good enough for a new building. It's an awesome facility but the floor should be replaced."

Fellow netballer Laura Hay broke her arm and two bones in her leg after coming down hard during her first game of the season in April.

It kept her off work for two months and she is still wearing a leg brace.

While she blamed her own clumsiness for her injuries, rather than the floor, she said she was not the only one who had hurt themselves while using the floor.

"In my team, there's only like three of them left. My friend came down on her arm and cracked it. I have a friend who plays basketball and he's out for the season."

She said a surface made for tennis did not suit sports like netball and basketball, which were more "high-impact".

But not all users feel the floor is out to get them.

Wanaka Futsal has used the centre for its competitions since it opened, switching from the Mount Aspiring College gymnasium, which has a wooden floor. Although someone broke a leg last year, organiser Richard Elvey said playing at the recreation centre was not a lot different from playing at the college.

"Some people have said it's a little harder on the knees over a long period, but overall I don't really think we noticed much of a difference."

Mr White said there were no plans to replace the floor, but he urged those who suffered injuries to report them to staff at the recreation centre so the council could identify any correlations between incidents and address any issues.

The Otago Daily Times was asked to submit a request under the Local Government Official Information and Meetings Act (LGOIMA) for information on how many floor-related injuries had been reported.

ACC could not provide a number of incidents, as its claim forms did not require a specific location.