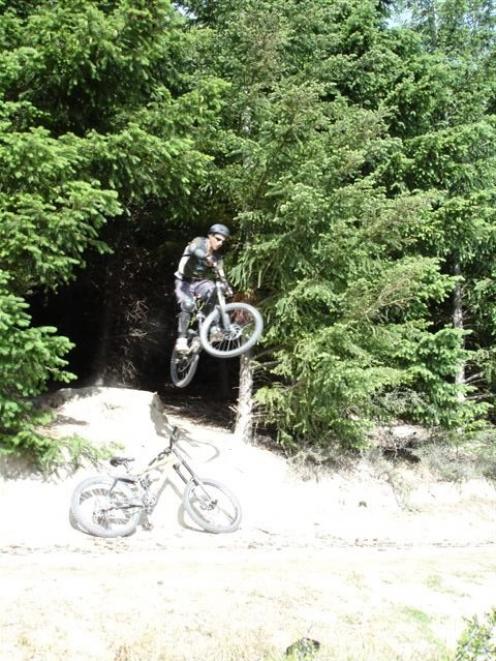 Willem Groenen, President Wanaka Cycling Club, emerges from a jump at Sticky Forest. Photo: ODT.
Wanaka residents passionate about Sticky Forest are encouraged to let their voices be heard at a public forum next month.

Sticky Forest is about 50ha of private forested land in Wanaka which contains a labyrinth of mountain biking tracks accessible to the public.

Bike Wanaka will host a community forum on the current situation regarding Sticky Forest at the Lake Wanaka Centre on February 14.

Tracks inside Sticky Forest are maintained by the group. Wanaka residents and mountain bikers from outside the area have lobbied for the land and forest to be protected as a community asset. In the past there have also been calls for the Queenstown Lakes District Council to buy the land.

The land is held in a trust by Te Puni Kokiri and the Minister of Treaty Negotiations for the descendants of 57 grantees of the land under the South Island Landless Natives Act. Bike Wanaka committee member Simon Telfer said the purpose of the meeting was to update people on what was happening behind the scenes in regard to the future of the forest.

There had been discussions between Bike Wanaka, the council and the descendants but the issues that came from them were complex, Mr Telfer said.

Because the descendants were not yet technically the owners of the land, it was difficult to negotiate with them over any potential future use.

A submission to change the zoning of the land from rural to low density residential would be looked at during the council’s district plan review this year.

Another issue was  all the land surrounding the forest was privately owned and access was at the discretion of one of those landowners.

"Those are some of the things at the moment and it’s  kind of a case of what will drop first."

Future access to the land was a "hot topic" for many residents, he said.

"We have people saying ‘I moved to Wanaka because of Sticky Forest’ and someone else saying ‘I’m up there five times a week’  ... so we wanted to hold this forum so people passionate about Sticky, not just mountain bikers, can get their views across."

"It’s a really good opportunity for everyone with an interest in Sticky Forest to join the conversation and let their views be known."

There was a possibility one of the future land owners would  attend, she said.

"Ultimately what happens to the land comes down to what the landowners decide so having  them there and part of the conversation is a good thing."