The first two pairs of great crested grebes to arrive at Lake Wanaka marina for the breeding season have already started their courtship behaviour, but some latecomers may struggle to find an empty nest.

Yesterday, six of the lake-anchored man-made wooden breeding platforms were removed to make way for the construction of a lakeside boardwalk by Queenstown Lakes District council contractors in the coming weeks.

Retired zoologist and grebes project founder John Darby said there was likely to be some disturbance to the grebes during the construction phase but once the boardwalk was completed a wetland ecosystem would be planted.

"I am hoping it will eventually provide enough food and nutrients for the grebes and all the other birds around here." 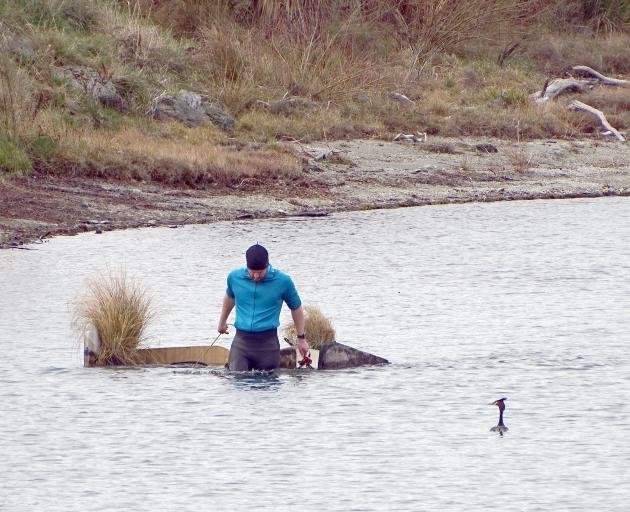 A grebe watches Wanaka Primary School teacher Markus Hermanns as he moves grebe breeding platforms away from the boardwalk construction site where work is due to start soon beside the Lake Wanaka marina. PHOTO: KERRIE WATERWORTH

Mr Darby said when he first started the project all the grebe chicks were reared at the marina, but within a day of hatching the parents now take the chicks to other parts of the lake.

"The highest number we have recorded was 53 adults in Stevensons Arm, which is OK because they are getting food, but I think that is always going to be a limiting factor."

Grebes cannot walk on land due to their anatomy, their legs are far back on their body which assists in diving but makes them vulnerable to predators.

Mr Darby began building the floating wooden nest platforms and tethering them to the marina when he discovered the grebes were unsuccessful in breeding on shore. One had even tried to build a nest on the back of a boat.

Eight years on and now in his 80s, Mr Darby has begun the process of handing the project, particularly the heavy work, over to Wanaka Primary School teacher Markus Hermanns.

"If you ask kids from a few years back ‘what do you remember from primary school?’ it is all about these trips we have done at the lake, the forest and the wetlands," Mr Hermanns said.

This Thursday, Wanaka Primary School begins its education outside the classroom programme.

Mr Hermanns said that most pupils went to the skifields but for those who stayed behind, he had planned a programme of visits to the grebes marina project and a talk by special guest Mr Darby later in the month.

• Grebes once inhabited at least 100 South Island lakes but numbers have been declining and now only 300-400 remain in the South Island.

• Numbers have declined mainly due to introduced predators and habitat loss through wetlands drainage and the establishment of hydro schemes.

• Nests can be stranded or flooded by artificial fluctuations in lake levels.

• Animals such as stoats, cats and raptors can prey on eggs and fledglings, and introduced fish and birds compete for food and breeding space.

• They are classed as endangered and fully protected.