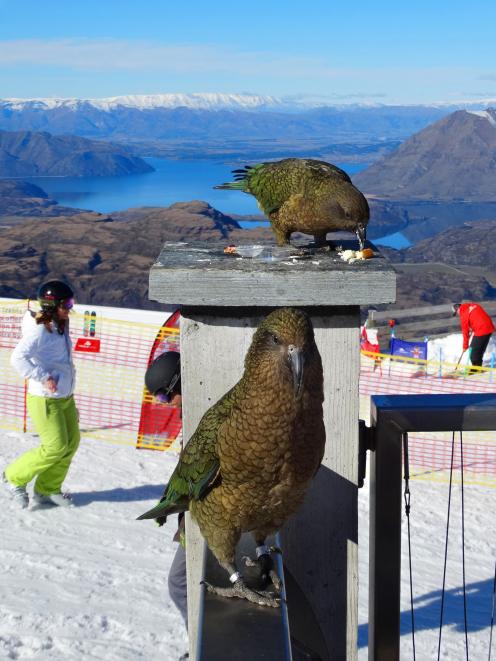 Kea check the menu at Treble Cone skifield’s outdoor cafe yesterday. Photo by Mark Price.
''Don't feed the keas.'' That's the message not getting through to some skiers.

A brief visit by the Otago Daily Times to the outdoor cafe at the Treble Cone Ski Area this week found four keas eating cream cheese, apple and chips.

And while many skiers were offering the birds nothing, and one told his children not to feed the birds, other overseas tourists were seen tempting them with bread and chips.

''Chocolate's lethal to birds so that is potentially a real problem.''

The native mountain parrot should be eating such things as native berries, seeds, insects including giant weta, roots and spaniard grass shoots.

''So he'll be taking back potentially junk food from the skifield.''

He urged skiers to secure bags containing food and remove left-over food from tables to stop keas helping themselves.

The Department of Conservation is also concerned about keas being fed.

''While a single chip or piece of bread is unlikely to be harmful, people must realise that if a kea is continually fed human food then the bird develops an artificial and unhealthy diet that replaces much of the natural food it needs.

''This can easily result in premature death.''

Mr Hankin said there can be further difficulties where a kea is supporting young chicks.

''If an adult has an unhealthy artificial diet so will their chicks, as they rely on regurgitated food from their parents.''

''Doc urges everyone to speak up if they see a kea being artificially fed.

''Chances are that person simply has no idea and will thank you for the advice,'' Mr Hankin said.

Do6manager Jackie van der Voort said yesterday she believed there were more birds at the ski area this year than in previous years.

The field worked with the trust and  Doc, she said, and signs advising skiers not to feed keas were in place.

Staff were advised about the kea issue at the start of each season.

Mr van Klink said Treble Cone staff had improved the situation by putting a heavy cover over the dumpster at the cafe to keep kea out of the rubbish.