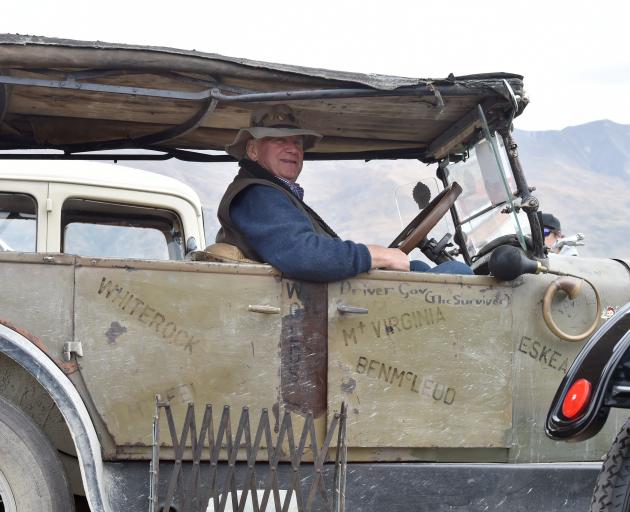 Gavin Ladbrook, of Timaru, in his characterful Dodge 4 Tourer, which bears the name of notable South Island stations, at Wheels at Wanaka on Saturday. PHOTO: GREGOR RICHARDSON
By his own admission Timaru man Gavin Ladbrook is no "Banksy", yet his 1924 Dodge 4 Tourer is a work of art.

Among the mirror-like finishes and gleaming chrome on display at Wheels at Wanaka on Saturday the vintage car stood out for being the complete opposite.

It looked like it could have just been driven out of a shed it had been parked in for close to a century.

Mr Ladbrook said that was the point — the fully registered and warranted car was "technically" only three years old.

"I put it together out of parts I had at home — there’s about six different cars in there."

Hand-assembled part by genuine Dodge part over a period of about three months, the car took a left turn from the usual restoration project but the vehicle’s "distressed" patina was all part of the plan, he said.

"I want to use it on back-country tracks, enjoy it and not have to worry about damaging it — that I could take anywhere like a Land Rover."

The odd scratch and ding along the way would only add to its charm.

Stencilled across the panels of the vehicle are the names of stations across the South Island and they were all places he had worked at in the past in various guises — possum hunting, deer stalking and building.

In keeping with the theme, its seats are upholstered with sacking he stitched together himself.

He was a longtime collector of vintage cars, and the vehicle made a unique addition to his fleet of 30 but it seemed to attract the most attention, Mr Ladbrook said.

"This causes a hell of a lot of interest."

Asked if he considered it to cross a line into art, he was not sure.

He was aware its uniqueness meant it was potentially worth more than a fully restored version.

He planned to drive the car to Alexandra in June for the start of the Irishman Creek Rally but had a few tweaks to make first — the suspension was a "bit bouncy" and the soft-top roof "leaks a fair bit when it rains".