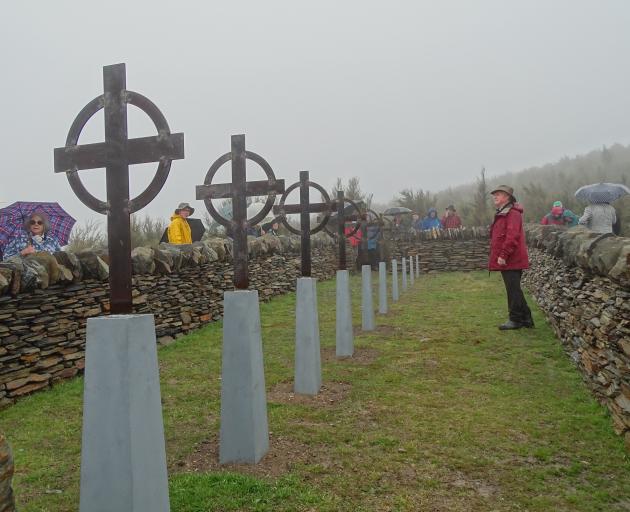 Otago sculptor Stuart Griffiths explains the significance of The Sniper's Prayer by Stephen Mulqueen at the installation ceremony at Queensberry Hills yesterday. PHOTO: KERRIE WATERWORTH
A sculpture commemorating World War 1 conscientious objectors originally proposed and then rejected for Anzac Ave in Dunedin has been installed in the grounds of a Central Otago sculpture project.

The Sniper's Prayer was made by the late Stephen Mulqueen in 2015 for the exhibition "In the Church Yard" in the grounds of Dunedin's First Church.

The sculpture is a set of 10 crosses made from welded and laser-cut mild steel that morph from gun sights into Celtic crosses.

Mr Mulqueen was one of the initiators of the Archibald Baxter Memorial Trust.

He had wanted The Sniper's Prayer sculpture commemorating Baxter and other WW1 conscientious objectors to eventually be installed on a grassed area of land in Dunedin's Anzac Ave.

When the idea was opposed by members of the community Mr Mulqueen gave the sculpture to Dunedin sculptor Stuart Griffiths shortly before he died last year.

"He loaded it into the boot of my car in Dunedin and said `you place this work where you think because I can't take it with me where I am going'," Mr Griffiths said.

Two weeks later he drove to the PoisonCreek Sculpture Project at Queensberry Hills in Central Otago to talk to one of the commissioners of the project, Sunny Collins, about future stonewall projects and sculptures, Mr Griffiths said.

He said she took one look at the sculpture and "it has never gone away".

At a ceremony for family, friends and associates of Mr Mulqueen the sculpture was officially welcomed to its final resting place in the grounds of the PoisonCreek Sculpture Project yesterday morning.