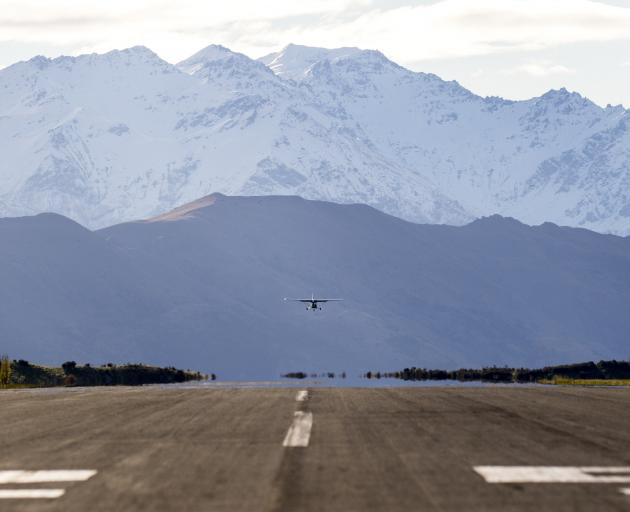 Planning for the future of Wanaka Airport is under way. Photo: Michael Thomas
Wanaka residents who are trying to guess how big the town's airport might become have been given some strong clues by two Queenstown Airport Corporation (QAC) documents.

They show that by 2045, there could be 2 million passengers either wanting to land at, or take off from, Queenstown Airport who cannot be accommodated there, even if the airport is expanded.

And, although the future of Wanaka Airport is still up in the air, the most likely scenario is that in 2045 those 2 million extra passengers will be passing through Wanaka.

One of the two documents is the QAC's master plan for Queenstown Airport which predicts 7.1million passenger movements per year by 2045.

The second document, which was released in June, outlines the QAC's desire to expand Queenstown Airport's ''noise boundaries'' in the district plan.

It says the QAC is planning for growth of up to 5.1million passengers per annum by 2045.

The difference - 2million passenger movements - is equivalent to the current traffic through Queenstown Airport.

QAC communications manager Jen Andrews said it was quite right to conclude that if the changes to the noise boundaries were accepted, there would still be 2million passenger movements ''left on the table''.

''It's important not to assume that Wanaka Airport would pick this up,'' she said.

''Until we do the master plan for Wanaka Airport, we can't say if there is the same demand to go to Wanaka as there is Queenstown or how the airport would be used.''

She noted the expansion of noise boundaries at Queenstown Airport was ''subject to community discussion''.

That suggests that if 5.1million passenger movements proves to be a step too far for Queenstown residents, an even greater number of passengers than 2million might be left on the table.

The Wanaka public has already been consulted over the future of their airport, and the ''master plan process'' begins next month.