US news anchor buyer of station

However, it might not be an easy ride for the American,  as at least one group  says it will do all it  can  to get "a better deal" for the public. The 59-year-old  was  named  last night by 1 News as the man behind Orange Lakes Ltd, the company listed  as the station’s buyer. 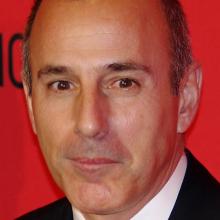 Matt Lauer.
Mr Lauer, who  lives in New York with his wife and three children, was granted consent by the Overseas Investment Office last month to buy the lease and improvements of the 6468ha  station.   The property has an estimated capital value of $13.2million.

It is understood  current leaseholders Taff and Pene Cochrane will remain  as managers. At the time of the OIO’s decision, neither the property’s selling price nor the buyer’s identity were disclosed.  In a recent  interview with  American talk-show host Jimmy Fallon, Mr Lauer gushed about   New Zealand.

"Have you ever been to New Zealand? It is the most sensational country on the planet in my opinion. It’s beautiful," he said.

Because the station is on leasehold land,  the Crown retains ownership  and the deal still needs to be approved by the commissioner of Crown Lands.In its summary of the decision, the OIO said Mr Lauer was a key person in a key industry.

Public access to parts of the station has been a contentious issue.  In 2015, the Cochranes temporarily blocked access to Meads Rd,   the only road access to the Department of Conservation’s Kidds Bush camp.

As part of the deal, Mr Lauer agreed to support and enable public access to several important sites, such as the Hawea Conservation Estate.

Another condition was to support and pay for surveying and legal costs associated with the Queenstown Lakes District Council taking over the road.

Walking access for trampers,  hunters, fishermen, horse riders and non-motorised cyclists must continue,  but the terms would be determined by the leaseholder.

Before the purchase was approved, representatives of  Mr Lauer met a group of 10 parties who were interested in boosting  public access on   the station.

Not everyone involved  in those talks  thinks  Mr Lauer’s deal is an improvement on  the current situation.

Federated Mountain Climbers president Peter Wilson said his group hoped  to get  the decision overturned  or for Mr Lauer to revisit it.

"Effectively, we thought we had negotiated a deal in good faith to allow access for all New Zealanders to a very important piece of conservation land."

Mr Wilson said those who took part in the talks  knew Mr Lauer’s identity but were  sworn to secrecy.