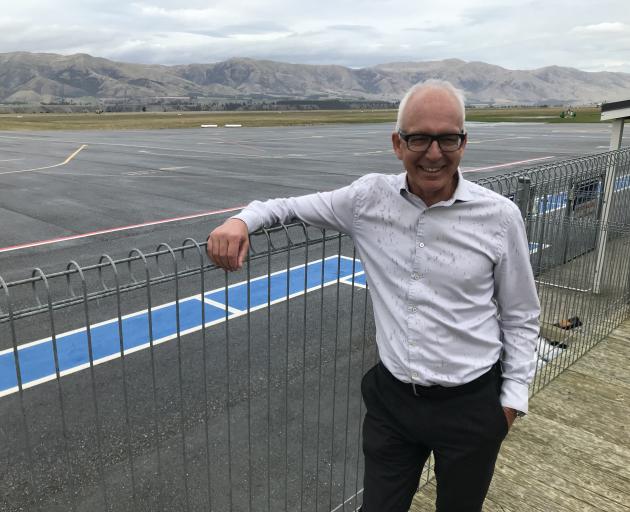 "[Queenstown is] not seeking to be a big hub airport. We know what we are. We are in the process of developing our 10-year strategic plan ... With development in aircraft technology, quieter planes, bigger, narrow-bodied aircraft, this creates opportunities for us over time to grow capacity without spilling demand ... We are confident in Queenstown we can service the district with air services for the foreseeable future, so Wanaka is not part of the plan," Mr Sowry said.

QAC is being paid about $300,000 a year for five years to ensure the safe and effective operation of Wanaka airport and manage its commercial tenancies.

Mr Sowry said he had spent most of his nearly eight months at the helm of QAC listening to stakeholders to gain an understanding of views about Queenstown and Wanaka airports and the Queenstown Lakes District Council’s (QLDC) past efforts to implement a "dual airport" strategy.

"All decisions around the future shape and role of Wanaka Airport are to be made by the QLDC as the owner. I’ve observed from all the conversations I have had with stakeholders and people in the Upper Clutha that people are very passionate about Wanaka Airport," Mr Sowry said.

Mr Sowry was not working for QAC when the High Court set aside QAC’s 100-year lease on Wanaka Airport last year.

The Wanaka Stakeholders Group (WSG) had successfully sought a judicial review of the council’s decision to grant the lease, on the grounds it did not comply with Local Government Act consultation requirements.

Mr Sowry confirmed he had met and had a constructive discussion with the WSG.

"They were very clear about their concerns," Mr Sowry said.

He had received "a clear message" Wanaka locals were open to increasing regional turbo prop aircraft services, such as those already being used by Sounds Air between Wanaka and Christchurch.

He had also learned some people could support expanding services to large turbo prop aircraft, such as Q300 or ATR aircraft. These have between 50 to 68 seats and could enable people to get from Wanaka to Wellington.

Air New Zealand mainly uses a fleet of narrow-bodied A320 or A321 jet aircraft between Queenstown and Wellington, Auckland or Australia but the WSG position was "very clear around their opposition to jets" in Wanaka, Mr Sowry said.

"Clearly there are different perspectives in the community. Some are more open to the idea, some against the idea," he said.

Electric aircraft technology was advancing quite quickly and in due course could replace short haul turbo props into Wanaka and Queenstown.

But there was no quickly developing technology to replace long-haul jet aircraft at present, he said.

"The only viable, non-kerosene fuel source on the horizon in the short to medium term is SAF — Sustainable Aviation Fuel, essentially created from grains ... It is being used, typically blended, with A1 kerosene.

"The emissions on that have a very different profile from fossil fuel and A1 jet fuel and are much more environmentally friendly. That’s in its relative infancy," Mr Sowry said.

Hydrogen technology was also "very much in its infancy".

Regarding Christchurch International Airport’s proposed international airport at Tarras and whether that would ease congestion at Queenstown Airport, Mr Sowry said Dunedin and Invercargill airports were both under-utilised and could be developed for less cost than building a new airport.

"My view is Queenstown Airport, in its current location, is its greatest asset.

"The proximity to town and accommodation and skifields, the attractions, all of the things that people are coming to that part of the world to experience and enjoy, are right on your doorstep ...

"Airlines will fly where people want to go. The ability to leave work on a Friday in Sydney, Melbourne or Brisbane and be in [Queenstown] for dinner, on the ski field the next day, ski all day and be on the plane the next day, there is high appeal in that," he said.