Ground crews supported by helicopters are continuing to fight a large fire at Glendhu Bay near Wanaka tonight in windy conditions.

No houses have been affected but an anticipated windshift later tonight could put a small number of properties at Emerald Bluffs in the fire's path.

Residents have been notified and police and Emergency Management Otago are standing by in case evacuations are required. 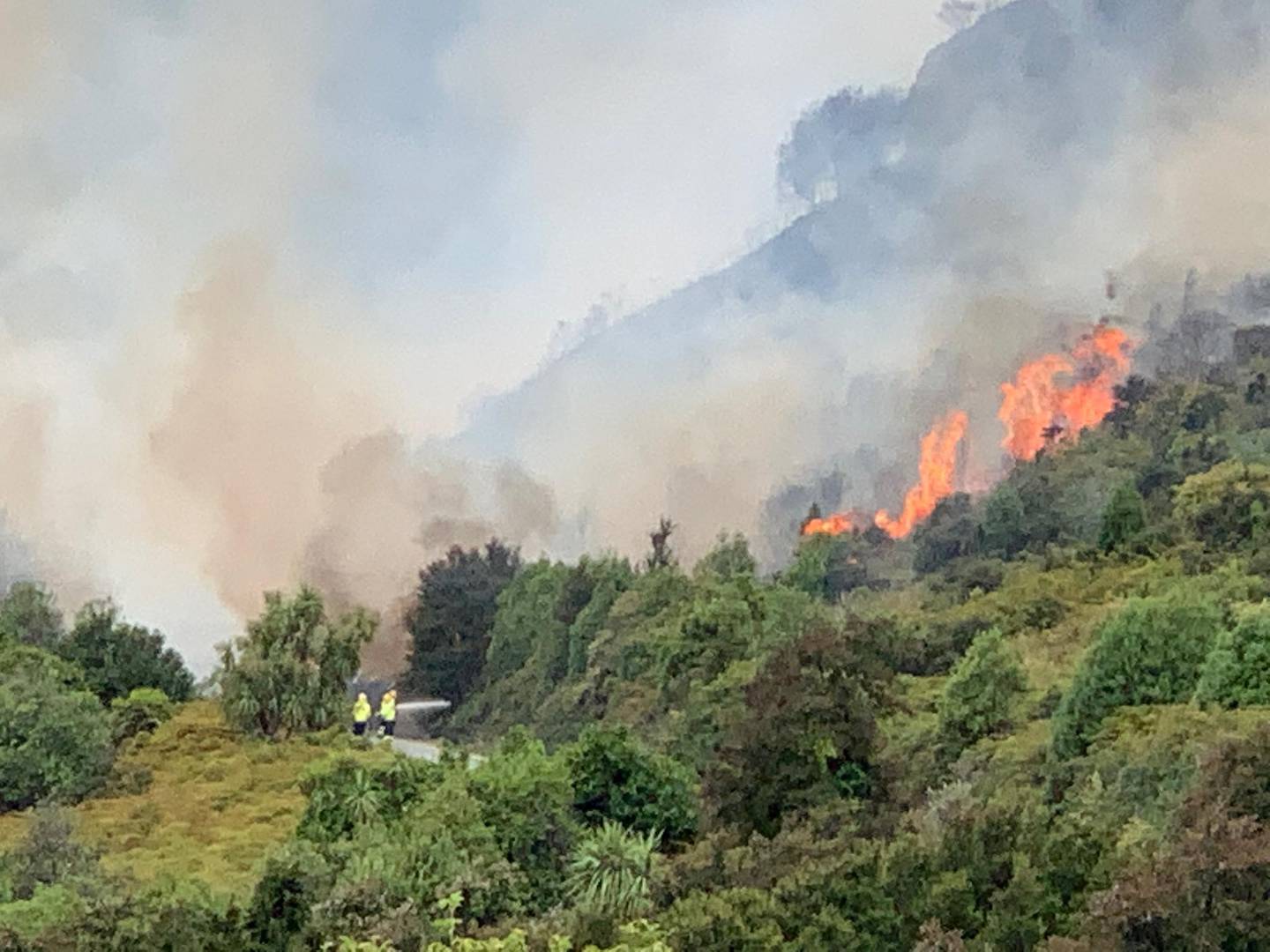 Multiple crews are fighting the large fire. Photo: Janine Weatherly
Fire and Emergency New Zealand (Fenz) incident controller Jason Sarich said at 8.30pm the fire was burning an estimated 180-200 hectares of regenerating bush and was still not under control.

Ten fire appliances and eight helicopters are still on site, co-ordinated by another aircraft.

Mr Sarich said the aircraft would stand down at about 9.30pm but ground crews would stay and monitor the fire overnight.

At 2pm, a Fenz spokeswoman said the fire was estimated to be 1km long and 100m wide.

It had jumped the road, and due to the nature of the landscape it was moving quickly, she said. It was also spreading up the hillside.

Crews from Wanaka, Arrowtown, Luggate, Dunstan and Tarras were fighting the fire, and about seven helicopters were assisting. 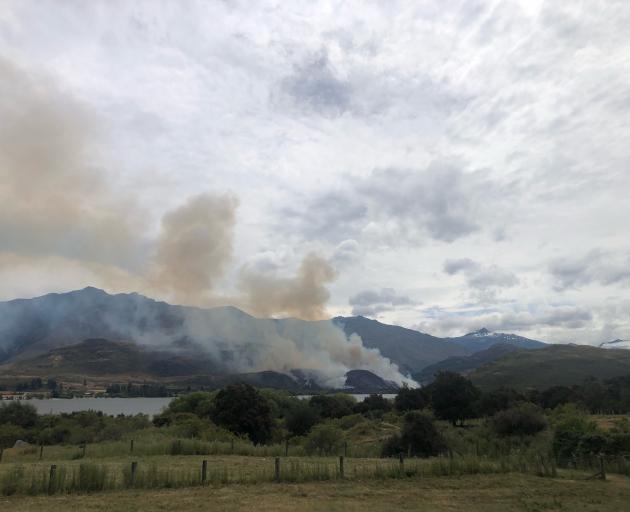 Wanaka Mt Aspiring Rd at Glendhu Bay is closed and power lines are reportedly on fire as the flames continue to spread.

About 30 cars are reportedly stuck on the road, which has been closed off, waiting to be able to carry on through to Wanaka.

An Otago Daily Times reporter near the scene said smoke was visible from Wanaka Airport, and flames were "moving quickly". 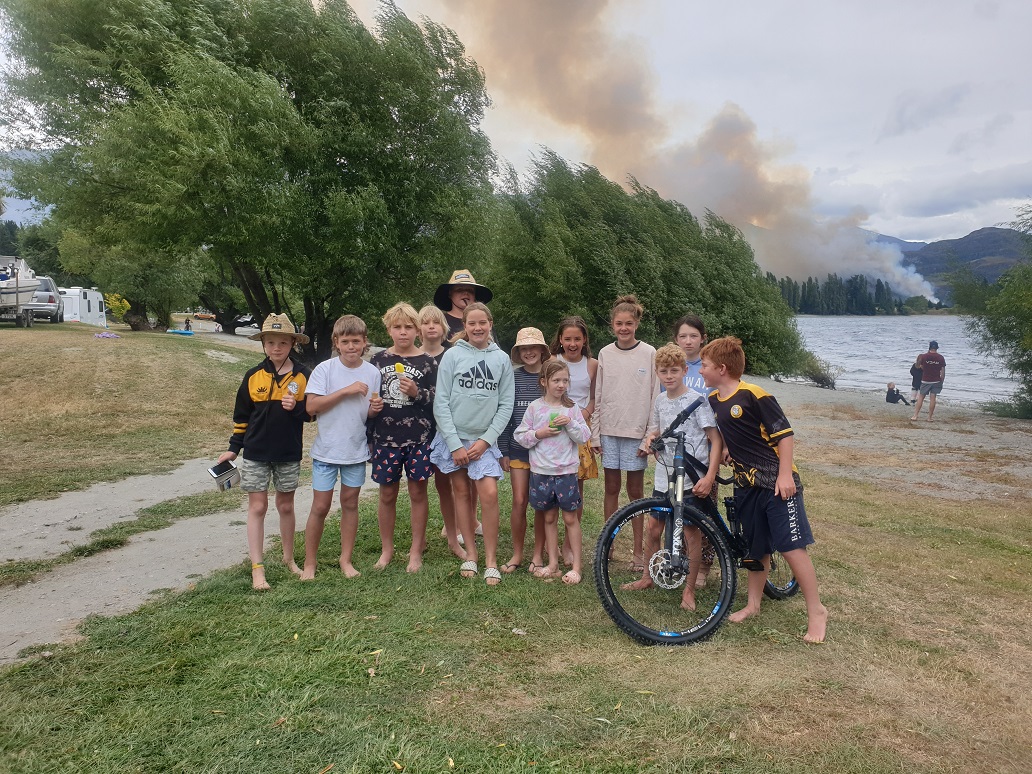 Some Wanaka children at Glendhu Bay camp ground as smoke from the fire rises behind them. Photo Andy Harridge

Part of the area burning is formerly part of Glendhu Station which was being retired for native regeneration.

A Department of Conservation spokesman said at about 6pm that the fire had also spread to Doc land.

They confirmed they would be sending Doc firefighters in to help quell the blaze on Monday morning. 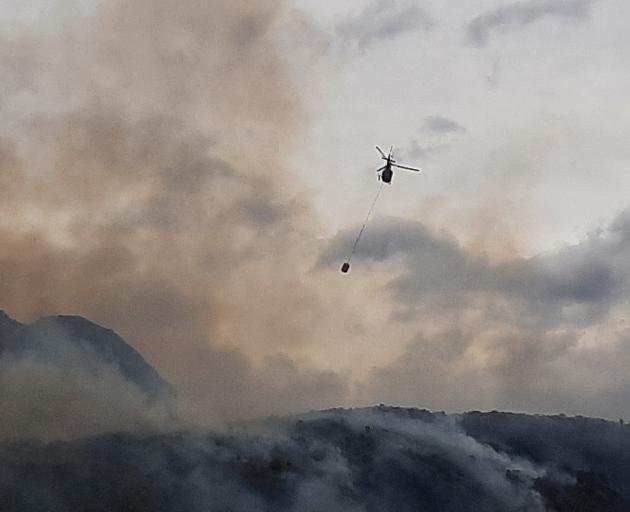 Bakker said the region is currently experiencing "mostly fine" weather with winds of up to 30km/h.

Wanaka may have some rain but Bakker said the likelihood of rain was low.

Bike Glendhu, a nearby mountain biking park, was evacuated as a precaution shortly after emergency services were called.

Local Jessica Schmelz was at Glendhu Bay Campground when she spotted the flames.

"Apparently it started on the lake side of the road, but has jumped the road and is well involved now," she said. 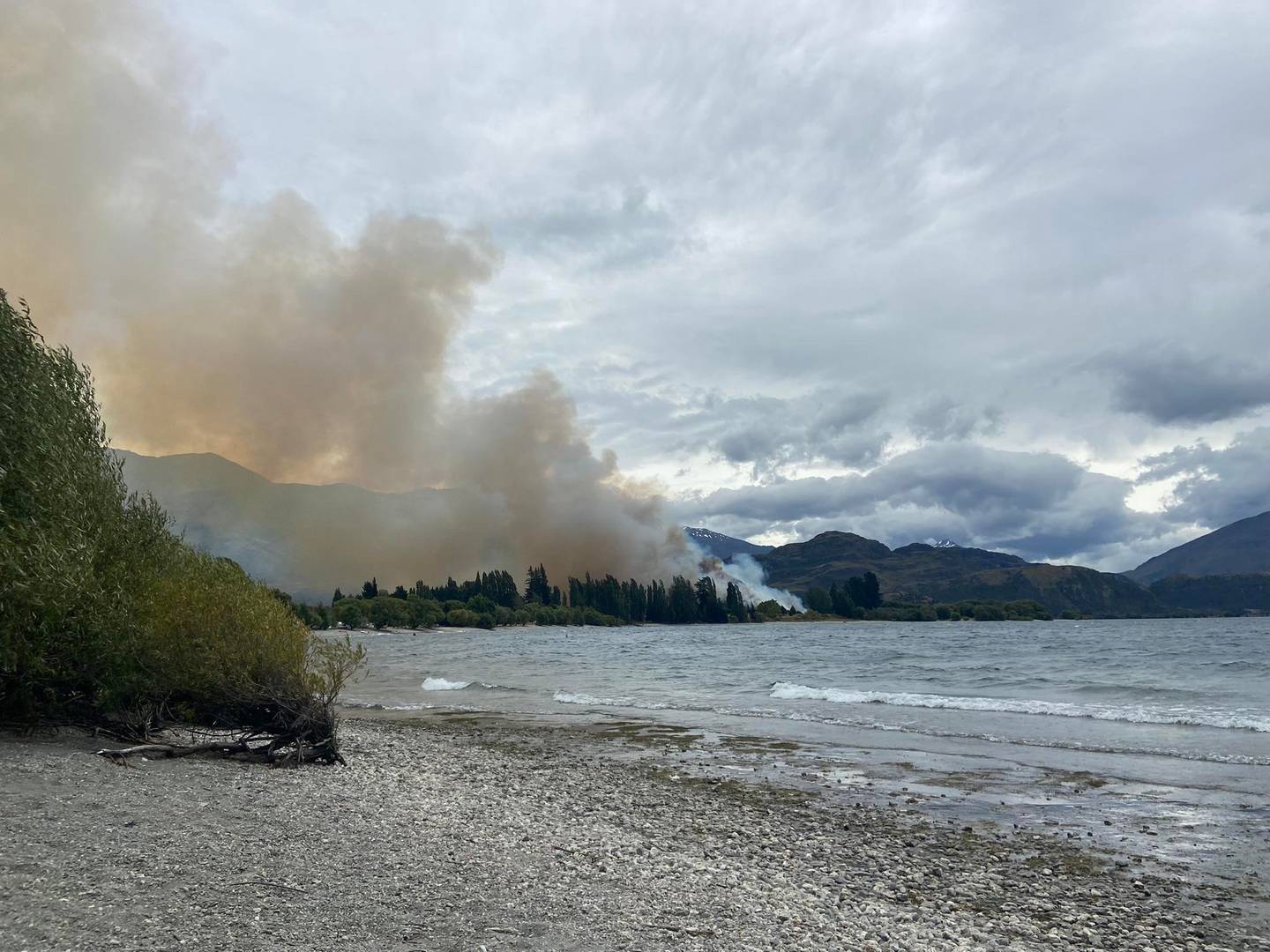 The fire is said to be moving rapidly due to windy conditions. Photo: Jessica Schmelz

People are being asked to avoid the area, and not to fly drones in the area due to the presence of helicopters.

"There have been reports of drones operating near the fire, this is exceptionally dangerous with helicopters in the air and they need to be ground immediately," Fire and Emergency said.

The drone in question has since been grounded.