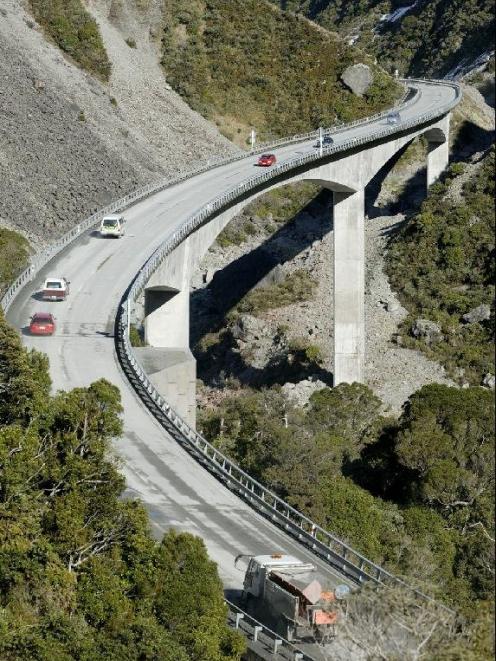 Greymouth Mayor Tania Gibson is suggesting road blocks on alpine passes such as Arthurs Pass (pictured) be used to stop the spread of Covid-19. PHOTO: SUPPLIED
Greymouth Mayor Tania Gibson says road blocks on the alpine passes may buy more time to get vaccination rates up on the West Coast, with fears Covid-19 is already circulating in the South Island.

However, with two confirmed infections in Christchurch, the region’s other mayors say they think it is already too late, after large numbers from the Coast travelled to and from Canterbury over Labour Weekend.

In the past, West Coast mayors have backed calls to close the passes between the Coast and Canterbury. Contingency plans have been made for that, but this time, they are not so sure.

However, the low vaccination rates on the Coast — some of the worst in the country — are a concern.

Mrs Gibson said there was a feeling of impending dread.

She felt people were divided — some would want roadblocks with Canterbury, though she agreed it might be too late. If Covid had not reached the Coast, roadblocks might be worth trying, at least to buy more time to get the vaccination rates up, she said.

With Labour Weekend just three days ago, and the person infectious during that whole time, the mayors of Buller and Westland say they fear a border closure would come too late.

Westland Mayor Bruce Smith said it was a decision for health authorities, but when pressed he said it was probably too late anyway.

"It was great to see the crowds [visiting] last weekend from Canterbury," he said.

It was now critical people got vaccinated.

Mr Smith said it was clear those in hospital with Covid were largely the unvaccinated.

"If you’ve thoughts of looking after your family and yourself, you should get the vax."

Buller Mayor Jamie Cleine said putting up a border was a medical decision, but "the cat’s out of the bag" so people needed to take personal responsibility and get vaccinated.

"We knew it would [get here], it’s not a surprise. Hopefully it’s a wake-up a few [unvaccinated] need to get them over the line."

The timing could not have been worse for Canterbury, with anniversary weekend just two weeks away, and then Westland Anniversary Weekend a month off.

The West Coast DHB reminded people to use the Covid Tracer app, wear a mask, keep 2m from strangers, wash and dry hands frequently, and stay home if they felt sick. — The Greymouth Star