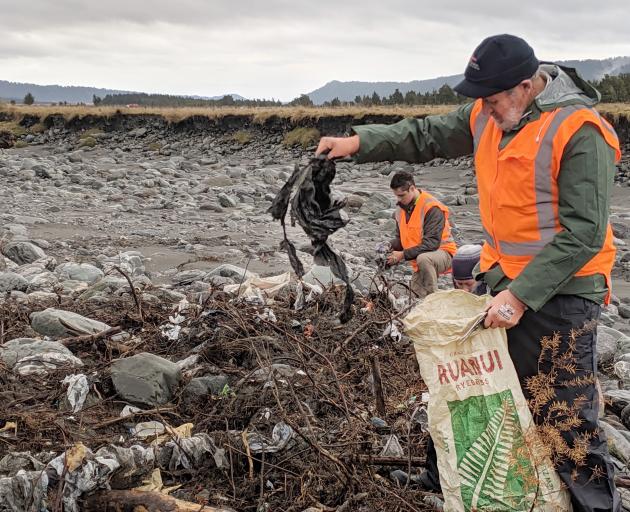 Aucklander John Duder travelled to the West Coast to volunteer cleaning up on the Fox River after his teenage grandson saw the story on the news and asked his granddad if they could help. Photo: DOC
It really is all hands on deck for the Fox Glacier rubbish clean-up as the army and an 81-year-old Aucklander join in.

John Duder and grandson Mukai Duder-Hura (13) travelled to the West Coast to volunteer after the teenager saw the story on the news and asked his grandfather if they could help.

Mr Duder, a self-confessed Jafa (''Just Another Friendly Aucklander'') spent all yesterday on the riverbed.

The plastic they found was often half full of silt, which in turn weighed down their large collection bags, which then had to be dragged over boulders. He spent a lot of time on his knees and crawling.

''It's a real mess [but] it's such a worthwhile job. Every piece of plastic, that's a fish we save. It's very satisfying.''

The Department of Conservation is leading the clean-up of debris from the old Fox Glacier township rubbish dump, which was blown out by a flood in the adjoining Fox River on March 26.

The New Zealand Defence Force is due to arrive the week after next, including aircraft, to help with the clean-up.

Doc has encouraged people from throughout the West Coast to join Operation Tidy Fox. It is supplying accommodation, lunch and dinner. Volunteers will also be transported to and from the work area on the Fox and Cook Rivers.

Meanwhile, the Defence Force has announced it will send up to 70 personnel, vehicles and aircraft to help.

Commander of Joint Forces New Zealand, Rear Admiral Jim Gilmour, said it had been planning with Doc over the past three weeks and was finalising arrangements for its support, which at this stage would happen over a four-week period from late July to late August.

The NZDF would also provide helicopter support, as well as military vehicles, to transport personnel and volunteers from the township to various locations and to collect bags of rubbish, he said.

They will arrive in South Westland in about two weeks.