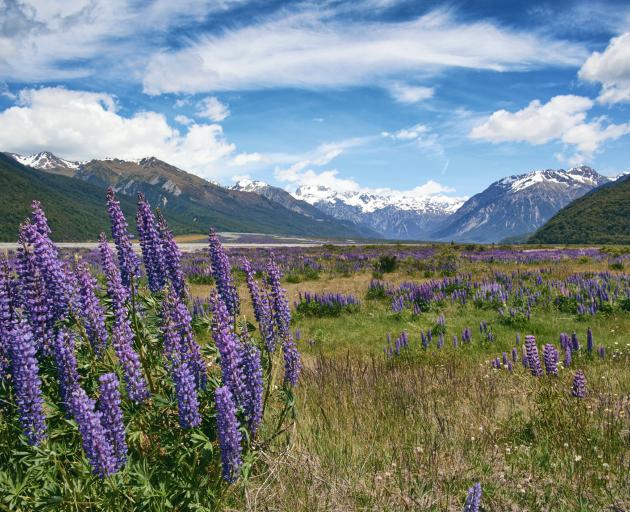 "I will certainly miss them from a landscape point of view," Greymouth photographer Stewart Nimmo said.

"There are always people photographing them."

Environmental groups say the invasive lupins are smothering the braided riverbeds in the area and taking over the nesting habitat of the wrybill, banded dotterel and black-fronted tern, making it difficult for them to find suitable sites that also provide cover from predators.

The Department of Conservation has previously mounted attempts to spray the Russell lupins.

A working bee to remove the plants by hand will be under way from November 10 to 18. Groups involved include the Arthur's Pass Wildlife Trust, Eco Canterbury, Conservation Volunteers NZ, North Canterbury Forest and Bird, Environment Canterbury, BRAID, Doc and Weedbusters.

Mr Nimmo said while he very much enjoyed their landscape value he also appreciated the damage they caused.

"They have become part of the landscape."

He noted there would be "huge opposition" if a similar attempt was made to rid lupins from Tekapo, where they were a major drawcard.

Cedric Trounson from the West Coast Shuttle, which travels the highway through Arthur's Pass daily, said few people he saw stopped specifically to photograph the lupins.

"There are a lot of people stop at the end of the Waimakariri bridge to take photos of the vista before them of the Waimakariri valley. I do not believe that the presence of lupins is a drawcard to bring people into this region, they are coincidental.

"I understand too that they adversely affect the biodiversity of the river valley which affects the habitat of many birds," Mr Trounson said.

Working bees will take place from 10am to noon, and 2pm to 4pm daily from November 10. They will involve removing the flower/seed spikes from the lupins by hand.