Truck convoy will be part of protest 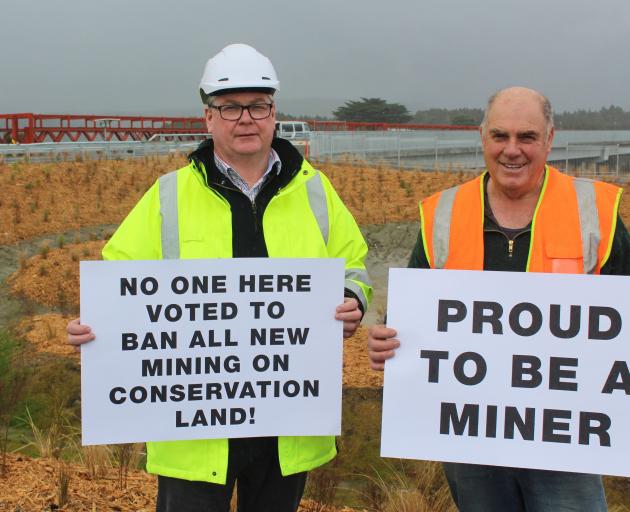 Peter O'Sullivan (left) and Peter Haddock prepare for the protest at the Taramakau Bridge opening on Sunday.PHOTO: GREYMOUTH STAR
A protest on the West Coast this weekend will include a large procession of trucks.

Go West Coast stressed the protest, prompted by a proposed mining ban, was to be peaceful and respectful.

The group was advertising it as a celebration of West Coast primary industries.

Trucks associated with the industries - including mining and transport firms and support industries - would assemble on Blake St, Blaketown, tomorrow morning and head south to the Taramakau Bridge.

Organiser Peter Haddock said there should be at least 50 vehicles, but there could be many more.

As each truck went over the old road-rail bridge for the last time, what the staff from each represented agency did would be described.

The official NZ Transport Agency bridge opening is at 2.30pm, to be followed by a rally march across the new bridge, and some short presentations on the contribution primary industries make to the Coast's economy.

"This is our opportunity to show the coalition Government the concerns of the region regarding the future accessibility and management of the conservation estate," Mr Haddock said.

West Coast-Tasman MP Damien O'Connor is officially opening the new bridge and National Party list MP Maureen Pugh and colleagues Jonathan Young and Paul Goldsmith will attend. None will be speaking at the protest.

NZTA system manager Pete Connors said it was checking safety "given there may be additional traffic at and near the bridge not part of the bridge-opening celebration".