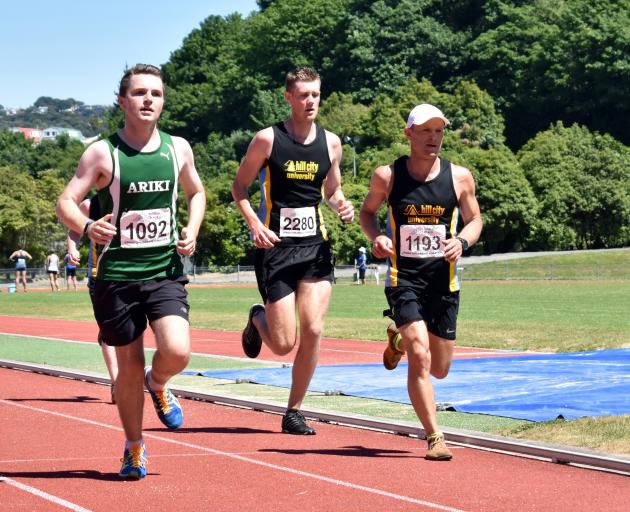 Aaron Anderson (left) shares the lead with Alistair Richardson (centre) and Tim Bolter in the early stages of the Otago 10,000m championships at the Caledonian Ground on Saturday. Photo: Wayne Parsons
Despite a chaotic finish, Aaron Anderson (Ariki) completed the Otago 5000m and 10,000m title double in a calendar year when he won the senior men’s Otago 10,000m title at the Caledonian Ground on Saturday.

Raced in a scorching  temperature of 29degC, it was not only the heat competitors had to overcome —  the first three finishers had to do  an extra  lap when a  lap counter missed a lap  and called them to do another. Anderson  accepted the error, saying things like that  happen.

Going into the final five laps, both O’Sullivan and Richardson having fallen off  the pace,  Anderson looked to up the tempo in an attempt to break away from Bolter.

As he crossed with four laps remaining Anderson held a 6sec lead on a determined Bolter. The margin remained the same until the final lap, when Anderson found another gear, still mustering enough energy for a sprint down the home straight to the finish, and claim the title in a time of 35min 25.36sec, a personal best by 1min 15sec.

Anderson described the heat during the race as being "absolutley brutal".

"You’d just be trying to concentrate on your rhythm and you’d get absolutely blinded by the sun. You couldn’t think for a couple of seconds and you’d have to snap back into it. Any other day I’d call this a cracker."

But knowing Bolter would take him down to the wire and having been beaten by Richardson last weekend in a 3000m race, Anderson knew all too well winning  was never going to be  easy.

"I’m pretty damn happy with that, considering I was injured most of the winter.

"I’ll probably chill out for the next couple of weeks, and work back into it after that."

Bella Bloomfield (Hill City-University) took a conservative approach into the race to win the open women’s title in 38min 10.04sec, and  give herself an early birthday gift. She turns 25 today.

It has been a successful year for Bloomfield, who in September won the Otago Marathon title to go with the Otago 5000m and 1500m title she won on the track earlier this year.

In other events, Kaikorai premier rugby player Kieran Fowler and Hugh McLeod-Jones (Hill City-University) had a battle royal in the discus and shot put events.

The two leap-frogged one another throughout the competition, McLeod-Jones only getting the nod in the shot put with his sixth and final attempt with a put of 14.20m. Fowler finished second with 13.71m.

It was much the same in discus competition with McLeod-Jones throwing  46.06m in his final throw to surpass  Fowler’s best throw of  44.01m.