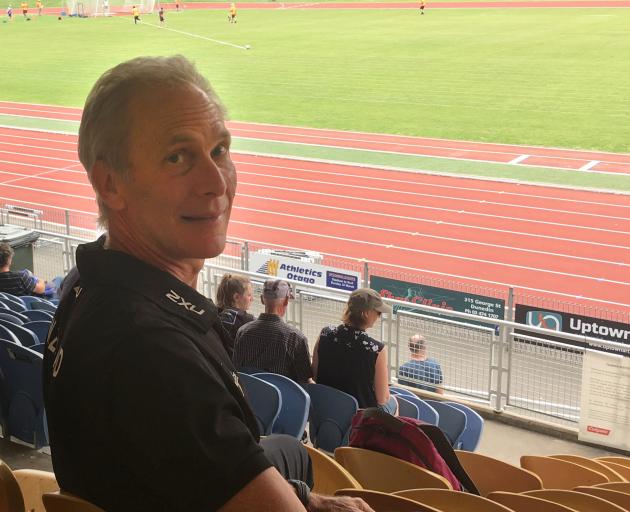 Athletics NZ chief executive Peter Pfitzinger at the Caledonian Ground on Saturday. PHOTO: STEVE HEPBURN
Athletics was like every traditional sport today, facing issues about numbers, coaches and getting volunteers.

But it had advantages that many other sports did not have, the boss of the sport in NZ said in Dunedin on Saturday.

Athletics NZ chief executive Peter Pfitzinger was on his first visit to the city in his new role.

He visited the Caledonian Ground and watched some athletes in action and was scheduled to be in Invercargill yesterday.

Pfitzinger, who competed at the 1984 and 1988 Olympics for the United States, was impressed with the Caledonian and the competitors lining up.

He said numbers were steady across the country and things were stable.

"We've got 19,000 athletes, 171 clubs, across the length and breadth of the country. That has been relatively steady but times are changing," he said.

"Volunteerism is down and it is tough to get coaches and kids these days have so many more sports to pick from. Say 50 years ago, there was half a dozen sports at best that you could do. Now there is so many to pick from. So how can we remain strong with those numbers and keep young people involved in the sport?

"With young people they need variety ... We are like a lot of sports. Good numbers up until about 12 and then there is a drop-off."

He said officials were also dropping out, so the organisation was trying to have new programmes and getting coaches together.

Coaching was a key to keeping people involved, he said, as the coaches set the tone.

Obviously coaches had to have the technical coaching component to make their athletes improve, but just as vital these days was to create a team atmosphere.

An example of that was getting together to have a meal, which was fun for the athletes and created a good atmosphere.

He said that would create a tight environment. Athletics could be a lonely sport, so this would help bring people together and hopefully keep them in the sport.

He pointed to Dunedin throws coach and para athlete coach Raylene Bates as being a coach who had gone down this path.

"She has made everyone welcome and they all become part of the family."

Pfitzinger (62) , who has been in the job since January, was proud of the way Athletics NZ had welcomed Para athletes into the fold.

He said Bates was a pioneer and the integrated programme was not hard to do.

Athletics had the advantage of being an inexpensive sport and anyone could jump or run.

He said getting volunteers was difficult but there was a dedicated group at the moment.

New Zealand was among the most respected countries for its approach to drug testing.

Anyone caught taking drugs would become an outcast and not be allowed into any sport in New Zealand, he believed.

His wife, Christine Pfitzinger, made a comeback aged 40, and he can remember sitting down watching Coronation St one night when the drug testers came round to test her.

That was accepted as part of the routine in New Zealand.