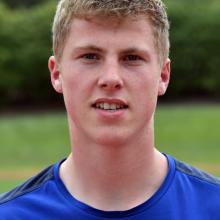 Cameron Moffitt
The bags of Otago athletes would have been a little heavier on the return trip from Christchurch.

Competitors from the region won a swag of medals at the national track and field championships over the weekend.

Headlining the senior events were the distance runners.

However, he was one of three Otago athletes to finish in the top six.

Jacob Priddey and Caden Shields came in fifth and sixth, while Joshua Baan was 10th in the 30-man field.

Rebekah Greene mirrored that effort in the women's 1500m, her bronze coming in 4min 26.75sec in a tight finish.

In the sprints Sophie Napper came home with three medals.

Alongside Christina Ashton, Fiona Centers and Rosie Elliott, she then claimed silver in the senior women's 4100m.

She backed that up a day later in the 4400m, claiming another silver alongside Elliott, Danielle Galdeman and Laura MacCulloch. 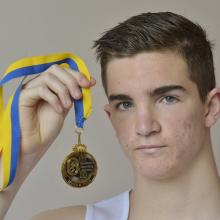 Cameron Moffitt continued his brilliant season by claiming comfortable golds in the men's under-18 110m hurdles and 300m hurdles.

Tara McNally also impressed in the hurdles, picking up bronze in the women's under-18 100m, while Jenna Thorne won silver in the under-20 400m hurdles.

In the men's under-18 long jump Shay Veitch backed up his secondary schools win by jumping 6.84m to claim gold by 1cm.

He then added a bronze in the triple jump.

Emma McKay was another to win two medals in the pit.

In the throws Dyani Shepherd-Oates claimed gold in the women's under-20 hammer, her winning distance being 49.58m.

Zharna Beattie also had impressive outings in the under-18 grade to win silver in the discus and bronze in the shot put.

Alexander Brown added a silver in the under-20 3000m walk.

In the para events Anna Grimaldi won both the long jump and 100m, while fellow Paralympian Caitlin Dore was second in the shot put.

Ben Baines took a gold in the javelin and silvers in the discus and shot put in his grade, while Liam Wilson won gold in the 100m.