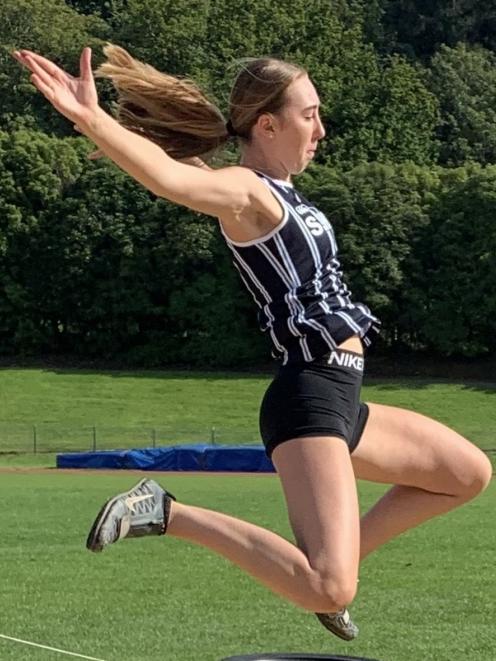 The 17-year-old claimed two gold medals across the opening two days of the national track and field championships.

Cullen jumped 11.06m to edge Southland’s Tessa Baird by 2cm on Thursday, taking the under-20 women’s triple jump title in the process.

Yesterday, she jumped 5.32m to claim the long jump title in the same grade.

Ryan Young put on a similarly impressive display in the under-20 men’s triple jump, winning silver with a distance of 13.37m.

He followed up with a fourth-place finish in the long jump.

Jorja Gibbons joined them among the medals in the under-18 long jump yesterday, soaring 5.45m with her final jump to claim gold.

She narrowly missed out on a second medal, coming in fourth in the 100m hurdles.

Cameron Moffitt showed his class over the longer distance hurdles as well, finishing in 57.59sec to win the under-20 400m hurdles title.

A hamstring injury prevented him from competing yesterday.

Not to be outdone, younger brother Luke Moffitt jointly claimed the men’s under-18 pole vault title with a height of 3.68m, while placing second in the triple jump with 13.65m.

Cole Gibbons also proved a winner in the hurdles, claiming gold in the under-20 men’s 110m race in a time of 15.77sec.

He added a personal best 3.88m in the under-20 pole vault to claim silver.

The women’s under-18 2000m steeplechase delivered two medals to the province.