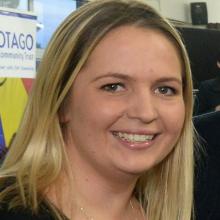 Charlotte Meiklejohn
Just under a month out from race day, entries have been flooding in for this year's Dunedin Marathon.

Confirmed entries have already exceeded the total competitors in the 2017 event, and are 1000 ahead of where they were at this time last year.

Entries peaked at 2369 in 2009, and slowly dropped off after that, but interest in the event is gathering momentum once again. Entries for last year's event were 799 at this stage, but as of Wednesday night the event had 1815 confirmed entries for this year. Last year, 1915 competitors entered.

The marathon was first held in 1979. The course changed last year and ended at Forsyth Barr Stadium, rather than at Port Chalmers.

Coinciding with Father's Day this year, the race was a great opportunity for dad and all the family to get out and take in one of Dunedin's premier events, race director Charlotte Meiklejohn said.

"Plus every finisher is awarded a medal at the finish line," she said.

The event is scheduled for September 1.

The attraction of the event has always been its scenic backdrop, the Otago Harbour being a highlight, and it now has the added experience for competitors of finishing on the hallowed turf inside Forsyth Barr Stadium.

This year, the course has been changed slightly and competitors will finish under the crossbar at the Otago Daily Times stand end.

Another feature attraction has been added to the start of the marathon this year, as it will now start at the albatross colony, instead of in the straight south of its entrance.

"We have little trouble in getting local featured attractions of the city ... behind the event, such as the albatross colony, university, botanic gardens and stadium," Meiklejohn said of the event playing a role in showcasing Dunedin.

Following many requests and hours of planning, a 5km fun run/walk course has also been included for the first time this year. This shorter distance provides a safe introduction to those who may wish to return for the 10km, half marathon and marathon courses in future years, or as an ideal distance for family participation in the event.

The half marathon will double as the New Zealand Half Marathon Championship.

"It's great to have the support of Athletics New Zealand given that we are one of the few remaining club-organised marathon events in New Zealand," Meiklejohn said.