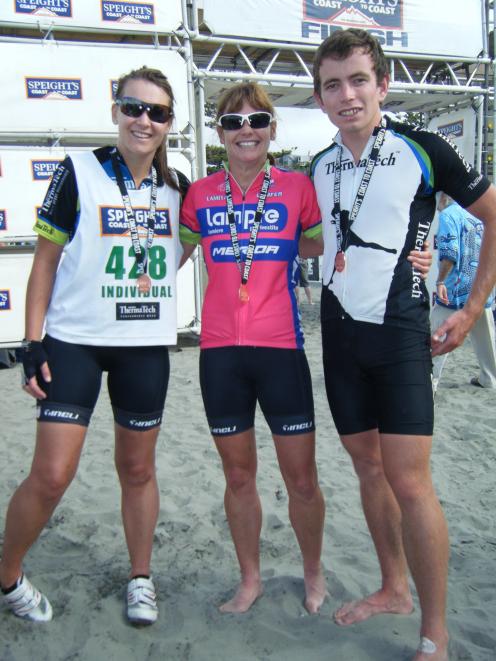 Standing on one coast, ready to head east.

The Faulkner family has been drawn to the Coast to Coast for many years now and that will continue next February.

Son James (23) and daughter Grace (21) will contest the two-day category and their mother, Simone (46), making her 10th appearance in the event, is having a fourth crack at the world championship Longest Day category.

Simone's association with the race began in 2008 when she finished 28th in the open women's category of the two-day category.

In 2019, she made it third time lucky at the Longest Day after being forced to withdraw from the one-dayer in her first attempts in 2009 and 2015.

Finishing in 15hr 50min 24sec, she was 24th in what the women’s field and third in the veteran women's category.

She admitted she was addicted to the race.

“The race is something really special and it's hard to stop doing,” Simone said.

As for the future, she is uncommitted.

“I can't say that will be the last. I may do it one day when I'm a classic,” she said of having four years to think about contesting the over 50-year-old age-group category.

Siblings James, Grace and older sister Jessica were all introduced to the course at a young age as members of their mother’s support crew.

Jessica had one attempt at the two-day race, finishing 28th in the open women's category in 2014 in 18hr 28min 16sec. Jessica is yet to return to the race but others have taken up the baton.

James, at the age of 16, rose to the challenge of the two-day category in 2013, finishing 42nd. The following two years he finished seventh both times.

With other things “taking a bit of a priority”, he then returned to podium in the team section of the 2018 event, achieving gold, silver and bronze with Alec Woolley and Garth Spencer.

The trio finished third in the category, clocking 11hr 44min 17sec. Silver came their way when they placed second in the mixed teams category and they claimed gold in the corporate section.

James will be returning to the two-day course in 2020 with a focus on using the race as a stepping stone for the Longest Day in 2021.

“It's an awesome event, to be part of. “I love the sport. Love the event and all the little build-up races to it. I'm looking forward to it.”

For Grace, it will be her third time on the course and second attempt at the two-day race.

She finished first in the girls school section of the 33km mountain run in 2016, clocking a smart 6hr 7min 54sec for an alpine run that has a maximum elevation of 1094.2m.

Grace returned for a crack at the two-day individual race in 2018, finish 20th overall in the open women's section clocking 16hr 3min 50sec.

Since her 2018 race, Grace decided to switch her focus to triathlon but did not like it as much as the Coast to Coast and has returned to the race.