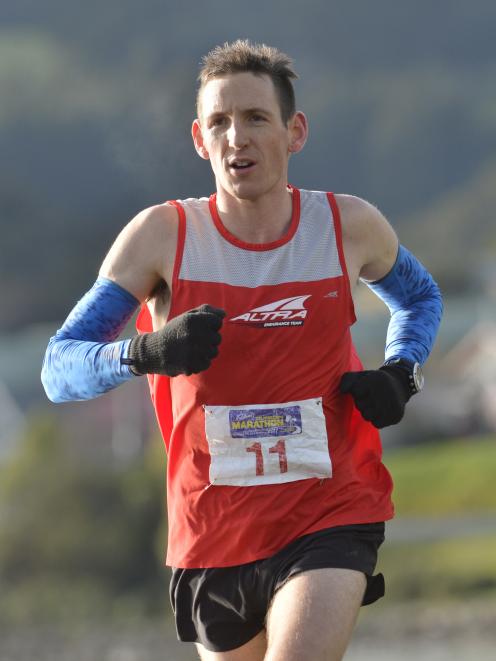 Over the first 30km, the battle of the Sams initially appeared Sam Wreford’s race to lose, but when cramping took hold, Wellington-based Sam McCutcheon dug deep to battle last-quarter demons and claim his second title in 2hr 27min 57sec.

With 158 chasing glory on the marathon course from the 1505 overall entries, a six-way contest took place from the start  between Wreford, McCutcheon, Jason Hall (Queenstown), Andy Good, Jason Palmer and defending champion Jonah Smith. All six travelled the first 10km at 2hr 20min pace until they began to split up and go into damage control.

"I realised it would be a bad call if I stayed with Sam’s pace," McCutcheon said.

"I pulled off and managed to recover all right," he said of his run from Portobello to Vauxhall.On the run down the West Harbour cycleway, McCutcheon noticed he was gaining on Wreford.

He eventually took the lead at Burkes when Wreford was in obvious discomfort from cramping.Originally from Dunedin, McCutcheon is another sporting success story out of King’s High School.

"Good runners from  King’s.  Tony Payne used to take this thing out, so it’s nice to keep it going," he said.

Admitting to not being a runner when he won the event six years ago in 2hr 39min 21sec in his first marathon, McCutcheon did not return to athletics until he moved to Wellington two years later.

While having a fondness for the course, McCutcheon struggled with the turns at the top end around Forsyth Barr Stadium.

"You just lose your momentum, and it’s bloody tough."

He added that he was lucky to have got involved with the leaders early and be able to draft into the wind, then enjoy the tail wind to the finish.

"I like to think I’m a bit hard, having grown up in the South, but I’ve got a bit soft since moving up to Wellington," McCutcheon said of starting in 4degC rising to around 10degC during the race, but with a serious harbour wind chill.

McCutcheon said the hardest part of a marathon for him was around the 34km mark, where he went into recovery mode over the next 5km.

When McCutcheon hit the dreaded marathon wall yesterday all he could think of was how far back the third-placed runner was, while slowing down by up to 15sec a kilometre.

"It eventually came right. But it can go one way or another. You either fall apart or you come right."

McCutcheon, the Kepler Challenge champion, was thrilled with his personal-best time yesterday, almost 6min faster than the time he clocked in Wellington at the end of June to finish third in  the New Zealand championship.

Work, running and beer was

what Hannah Oldroyd offered as the secret to her success in the open women’s marathon  yesterday.With Christchurch, Wellington and Kangaroo Island marathon under her belt in recent months, Oldroyd said  the past week of work had been a marathon in itself, with after-work drinks on Friday night going to the early hours of Saturday morning.

"We were in the pub drinking Guinness last night," she said.

The 30-year-old finance analyst  displayed no apparent ill effects from the past week as she led the field throughout to finish in 2hr 59min 22sec. Dunedin’s Bella Bloomfield was second in a personal-best time of 3hr 4min 52sec and Wellington’s Sarah Dallas third in 3hr 14min 22sec.