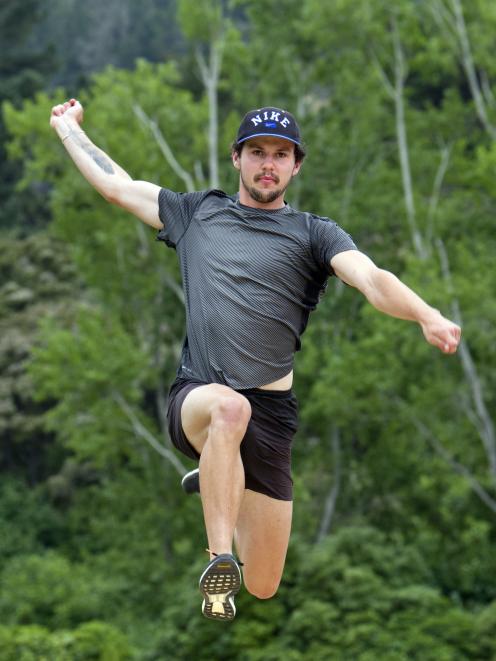 Felix McDonald trains at the Caledonian Ground this week ahead of his two competitions over the next three days. PHOTO: CHRISTINE O’CONNOR
Felix McDonald does not have to go far to find competition these days.

As the track and field season enters its serious phase from today, the country’s best will travel to come up against each other more regularly.

That is something the defending national long jump champion has not had to wait for.

McDonald (Taieri) and Shay Veitch (Ariki) have made Dunedin New Zealand’s No1 hotbed in the event.

But McDonald has the national title to his name.

It is an intriguing local rivalry and it will make the men’s long jump one of the event’s to watch at Monday’s evening’s Yvette Williams Memorial Meeting at the Caledonian Ground.

McDonald said it was great motivation having that type of competition on a local level.

"It steps it up a notch without even really trying," the 22-year-old said.

"You don’t have to do a lot. Both of us just have to show up and the competition’s on really, isn’t it?

"Before then, there was nothing really on the line.

"But it does make it quite a challenge, which is good."

McDonald is also competing at the Lovelock Classic in Timaru today, meaning he will get plenty of jumping over three days.

He will also compete in the 100m at both meetings.

Having linked with new coach Brent Ward just prior to the Covid-19 lockdown, McDonald was pleased with his early-season form.

Maintaining that would be the challenge now.

He went away for the Christmas break and trained through it at a lower intensity.

That did not mean he was expecting to come back with anything less than a top performance though.

"I’ve had a couple of sessions back jumping-wise, things are feeling good.

"So I’m pretty excited to get out there and jump good."

His goal now was to qualify for the World University Championships later in the year.

To do that he would need to jump 7.60m — a distance he has surpassed with wind assistance.

His legal personal best is 7.54m and he felt the qualifying mark was very much in reach.

He qualifies through the post-graduate study he is doing at the Otago Polytechnic with the aim of becoming a strength and conditioning coach.

The meeting boasts a handful of the big names of South Island athletics. High jumper Hamish Kerr has been to the world championships, while Anna Grimaldi and Holly Robinson are both Olympic medallists.