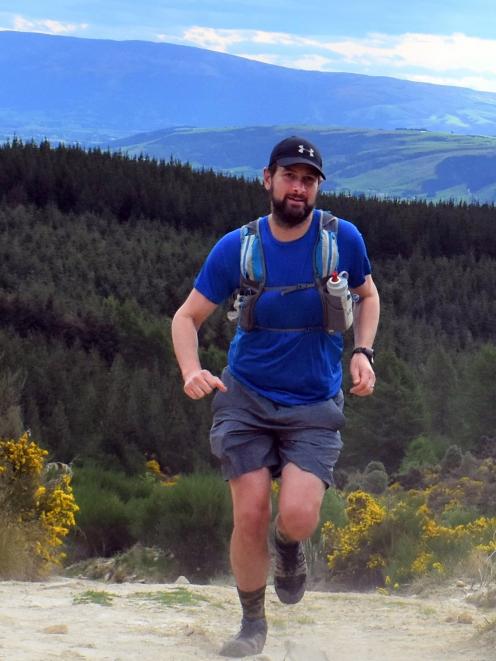 Tristan Sames trains on Flagstaff in preparation for February's Longest Day race at the Kathmandu Coast to Coast. PHOTO: WAYNE PARSONS
It is a launch into the unknown for Tristan Sames, although he has given himself plenty of lead-in time.

The Dunedin-based fifth-year medical student is lining up in the individual one-day section of the Coast to Coast.

With entries for the 2020 edition of the race closing in early May, Sames entered early and had his place secured.

The shut-off date was the earliest for the event which started in 1983.

Sames (35) said the event had always held an appeal, but it was not until meeting wife Nicki and moving to Dunedin for medical studies that the lure of the race began to really take hold.

“I have a wife who is wild about triathlons and I got the bug from her,” he said.

“Equally, it's always been a bit of a bucket list thing as it’s one of the most iconic races in the world and the thought of being part of that was too much to resist.”

Although the couple have competed in numerous running and ironman events in recent years, they confess to being just “weekend warriors”.

A Canadian from Calgary, where he was a keen mountain biker, Sames moved to New Zealand 16 years ago, basing himself in Auckland where he met his future wife.

Since arriving in Dunedin, the couple have discovered the city is made for sport, particularly running and biking, and three years ago Sames was encouraged by Nicki to run his first half-marathon.

“It was abysmal and I hated every second of it,” he said.

‘‘But things just grew from there somehow, and one day I stopped hating running and began to enjoy it.

‘‘I sold one of my mountain bikes to buy a road bike and it just went from there.

‘‘It just brings out my inner geek I guess. At the very least, I'll look the part.”

Over the past three years, the couple have contested three half ironman events together as well as a “handful” of Xterra triathlons.

“I've been crossing the finishing line in absolute agony and misery but somehow been able to enjoy the event. As soon as you've forgotten about the pain, you've enrolled in another event.”

Like many in the South, Sames’ first triathlon was the Easter edition of the Lake Hayes Triathlon in which he competed in 2017.

Undeterred by being one of the last to finish, and the contest having aleady been won before he set off on the run stage, Tristan found only motivation from the experience.

“I froze my arse off in the lake, got lapped by everyone on the bike, but it was still enough to plant the seed. You couldn't get much worse than that. So it was onwards and upwards.’’

He said it was his one chance of getting the Coast to Coast ticked off.

“I'm aware that come 2021, the life of a junior doctor is pretty brutal and this is possibly the last real opportunity to devote any time to what is one of the most iconic multisport events in the world. There was never going to be a better time. So I thought I'd give it a nudge.’’