He lifted the senior men's title at Waikouaiti Racecourse on Saturday.

Staufenberg (20), a national under-23 triathlon representative, is in his second season of winter running to complement his swimming and cycle training.

"It was a particularly good race from start to finish," Staufenberg said of mixing it early with the fast pace applied by Balchin.

"There were some good fast laps. I found a little bit of energy up the hill so I thought I'd give it a crack."

Little separated the two for the first of two hill climbs. 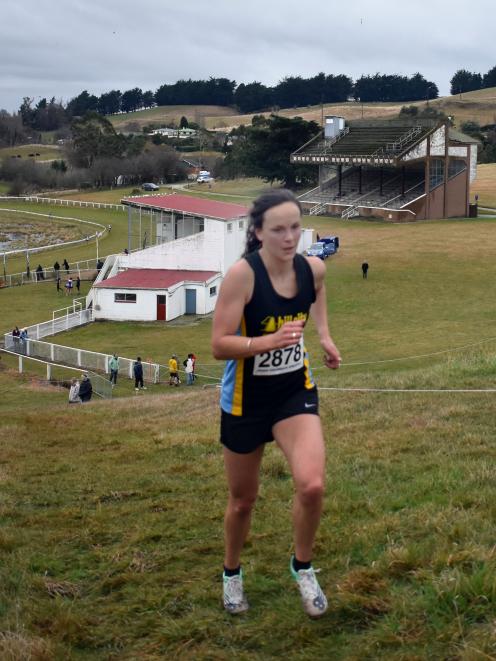 Senior women's winner Rebekah Greene calls on all her reserves on the steep climb at the top of the course.
It was on the third climb that Staufenberg opened a slight advantage.

He applied pressure on the remainder of the 10km course, taking a 10-second lead on the final climb to finish in a smart 32min 30sec on the damp course of clumpy grass.

Balchin crossed for second 12 seconds behind, with daylight back to third-placed Nic Bathgate (Leith) in 35min 30sec.

"I gave it a good surge and pushed it up the hill," Staufenberg said of his final lap.

"I do a lot of training on the hills, so I really used that to my advantage."

Not since Allan Carman won his sixth Otago cross-country title in 2003 has a representative from Leith lifted the individual trophy, first contested in 1905.

It has been 20 seasons since Leith won the highly prized four-man team trophy, but on Saturday Staufenberg broke that club's senior men's trophy drought.

Greene (25), a Dunedin-based marketing assistant, has retained a high profile on the national stage this year.

Recently returned from the Oceania Championships in Townsville, where she contested the 1500m and 5000m, Greene found herself caught up in a fast start on Saturday.

Although a little concerned over the middle stages, she found an extra gear over the final lap to power home almost five minutes clear of second-placed Kristy Eyles (Caversham) and Bella Bloomfield (North Harbour Bays) in third.

"I kept thinking that I shouldn't push it too much because we have nationals in two weeks," Greene said of her race, with an eye towards the national cross-country in Upper Hutt on August 4.

"At the same time there were people on the course that I didn't want to come up and pass me," Greene added.

In the teams race, it was a rare double for Leith, with its senior women's team of Sharon Lequeux (4th), Lydia Pattillo (5th), Sophie Smith (6th) and Gaya Gnanalingam (7th) winning the trophy.