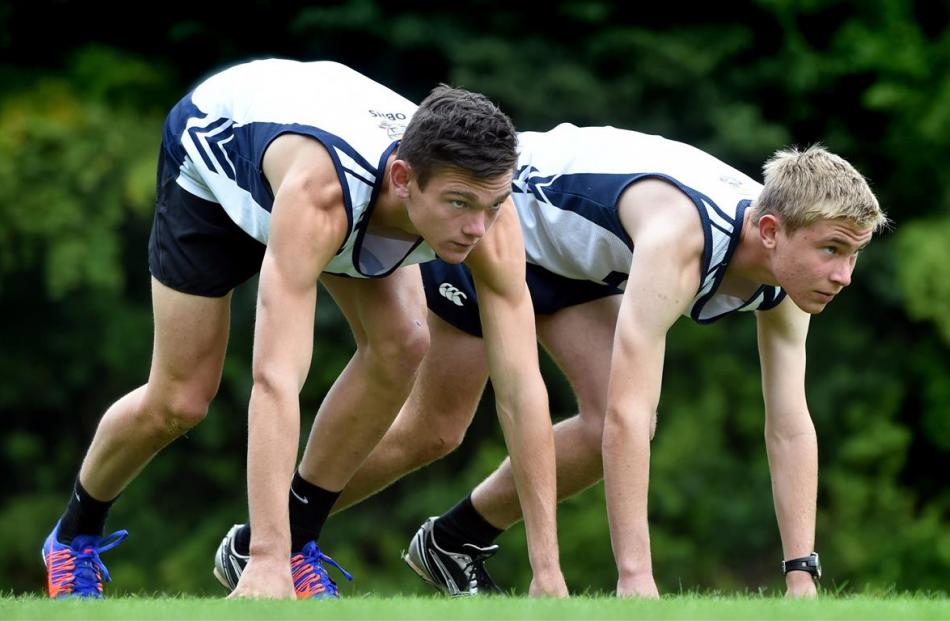 Nathan Hill and Liam Turner know a thing or two about winning and the Otago Boys' High School pair have been doing plenty of it recently.

Hill (16) and Turner (17) showed they are athletes to watch, following top performances at the recent Otago and Otago-Southland secondary schools track and field championships in Dunedin.

Hill has been in record-breaking form over 1500m, smashing two records in as many weeks.

He started off by destroying the Otago secondary schools under-16 1500m record by 11sec at the Caledonian Ground three weeks ago, crossing the line in a personal-best 4min 7.36sec, despite battling flu before the race.

He followed it up with a similar performance at the Otago-Southland championships the following week, when he won in 4min 7.76sec. It broke Blair Martin's 25-year-old record (4min 8.30sec). Martin went on to win numerous Otago and national middle-distance titles, and also represented New Zealand in cross-country.

Hill also enjoys cross-country running and is a member of the Leith club. However, he believes he is better suited to the track and plans to stick with the 1500m distance. He also plays football for Otago Boys' and the Maori Hill club. Turner, a 400m and 800m specialist, also showed he is one to watch.

Turner, who took up athletics when he was 9, has been selected to run the 400m and 800m in the youth section at the Oceania Regional Championships in Tahiti next month. He will also run a leg of a 4x400m relay race in a team which includes Taieri's Sam Gouverneur.

Turner is also a handy sprinter, and won the 100m, 200m, 400m and 800m on the same day at the Otago Boys' championships earlier this year. However, he realises he cannot run them all if he wants to succeed in future.

‘‘At the moment, I will keep my options open. Some people reckon I will go back to being a sprinter,'' he said.

Turner is also a keen rugby player, but is thinking about giving it up to concentrate on athletics this winter.

‘‘I might try and get a winter based season in,'' he said.

‘‘[Athletics] is choosing itself over rugby, to be honest.''

Both Turner and Hill will compete at the South Island secondary schools track and field championships in Timaru this weekend.