By Wayne Parsons
0 Comments
Following two years he would rather forget on the course, Jonah Smith (Caversham) picked up his second Dunedin Marathon title yesterday.

Smith became locked in an all-the-way battle with Matthew Moloney (Wellington Scottish), after the two worked together following a fast start by the 220-strong field.

Their conservative start and approach soon paid off as early leaders drifted back, and Smith and Moloney cruised through to open up an 800m gap heading through Harwood. 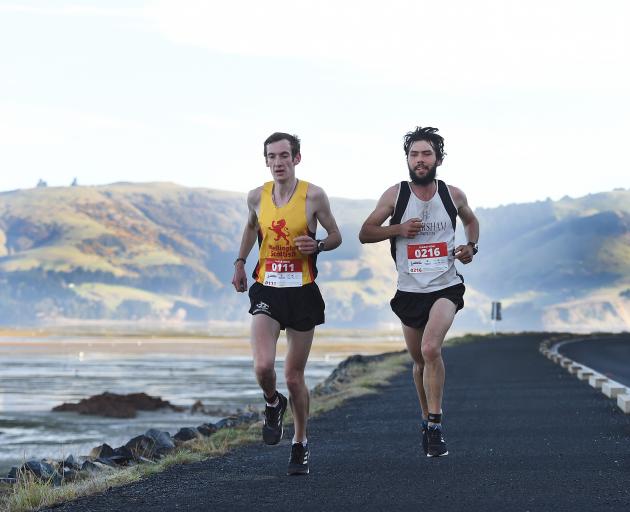 The pace of the pair set them up for virtually even splits as they passed the halfway point in a time of 1hr 16min. Smith eventually crossed to win in 2hr 33min 59sec. Moloney was second in 2hr 34min 58sec, with national age-group triathlete Jared Millar (Timaru) third in 2hr 48min 26sec.

Smith said that early on he started to feel the pace and decided to tuck in behind Moloney. The two shared the lead until Smith felt the pinch and drifted back off Moloney's pace.

"I wasn't really sure how the legs were going to hold up," Smith said.

Passing the stadium with about 8km left, Smith "hit the wall for a minute and couldn't really hold the pace".

"I thought I was gone for sure."

However, he recovered and came back at Moloney.

"I figured if I was able to work back up to Matt, I had a shot."

Turning back towards the stadium finish with 4km to go and taking advantage of a tail wind, Smith worked his way past Moloney and stayed strong right through to the finish.

"I didn't dare look back," Smith said of an excited but nervous run to claim his second title.

After winning the title in 2016, Smith had a bad run. In 2017 he withdrew around the 30km mark because of cramping, and last year he got the flu before the event and battled his way to third place.

He said that despite being in the middle of calving with his farm labouring job, he has been able to maintain full fitness and a solid training regime.

Up to two months ago his training had been a bit thin due to a niggle in his hip that has since come right.

"The main things [were] getting a few tempo runs in and working the legs a bit and getting some speed up."

Coming into the race his main concern was Moloney, who had recorded some impressive results recently.

The duo both began running marathons five years ago, but have never raced each other before over the distance.

Mel Aitken joins Sarah Chisnall as one of the most successful athletes on the Dunedin Marathon course after picking up her fourth title yesterday.

Aitken said starting with a big hill made life interesting and set the scene for her to get into a rhythm, which she maintained throughout to finish unthreatened for the lead in 2hr 55min 33sec.

Aitken said she lost 150m going through the road works south of Portobello.

"Nothing like a bit of trail running in a road race," she joked.

Canterbury's Tracy Abbott was running in memory of her father, who died one year ago to the day yesterday. She managed to give her late father an outstanding Father's Day gift when she finished second in 3hr 5min 2sec.