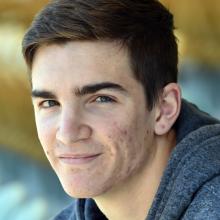 Shay Veitch
Otago's top school athletes will be looking to be among the medals in Wellington this weekend.

Prime among those is John McGlashan College’s Shay Veitch, who will look to defend his senior long jump title.

The year 13 pupil burst on to the scene when he jumped 7.11m last year to win gold in the event.

He has since starred for Ariki this summer and will also compete in the 400m this weekend.

Among the school’s other medal hopes are Josh Hou in the 800m and 6km road race, and Liam Wilson in the para-junior long jump, 100m and 200m.

This year both step up to the senior grade, although should still be well among the contenders.

They will face other strong competition from Otago athletes in King’s High School’s Liam Condliffe and Taieri College’s Tara McNally .

McNally is part of what looks to be a very strong Taieri College team.

Ethan Walker and Mikairi Beauchamp-Moore should rate highly in the boys and girls senior javelin respectively.

Zharna Beattie will contend in the senior girls shot put and discus, while younger sisters Neve and Shyah will compete in the junior grade.

Ben Baines will look to continue his winning ways in the junior para throwing events, while Olivia Ellis rounds out the squad in the junior high jump and 80m hurdles.

Catherine Lund, of Columba College, will also be a factor in those races.

Mount Aspiring College’s Abby Fisher will be a favourite in the junior girls 200m, while Hayato Yoneto (Wakatipu High School) and Ben Smith (Waitaki Boys’ High School) will both hope to do well in the senior boys sprints.

Nirvana Hepi-Breen (Kaikorai Valley College) will look to carry on her strong season in the junior girls throws.

Otago Girls’ High Schoo’sl Emma Mackay shapes as a high hope in the senior girls long jump and triple jump, while Jordan Evans-Tobata will hope to contend in the junior 400m.

The championships begin today and conclude on Sunday.