More importantly, they set a marker for the national championships, to be held on the same course in 19 days.

A strong wind swept across the links, making an already challenging course even more so.

But that did not deter the favourites from the 10km races.

Staufenberg (Leith) found himself in a duel with University of Canterbury runner Daniel Balchin, who is based in Central Otago.

The pair opened up an early gap over the field and traded the lead several times over the first three laps.

But Staufenberg pulled away at the 6km mark.

He opened a 20m gap over the next kilometre, which he extended throughout the final 3km to cross the line in 33min 27sec.

It was a run Staufenberg was happy with, particularly given the course and the wind.

He had not intended to break away when he did, although he put his foot down after opening the gap.

"I think I just held the same pace and did a little bit more pushing in the middle of that [fourth] lap.

"And then I think Daniel started to break away, so I just put down the hammer for that last lap."

It was the first cross-country held at the Chisholm Links and acted as a trial run for the national championships.

Staufenberg liked the course, although admitted it was hard work.

"Lots of hills, lots of sharp little climbs. They bite, they bite in your quads."

He said he had work to do before those nationals, but would be targeting a top-10 finish.

She finished in 39min 26sec, nearly 4min ahead of second-placed Olivia Gold (Leith).

She tucked in with a group in the men’s race — both men and women ran together — before running the last two laps on her own.

It was a strong display which should leave her well placed again heading into the national event. 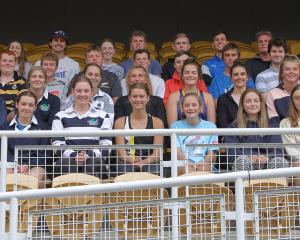