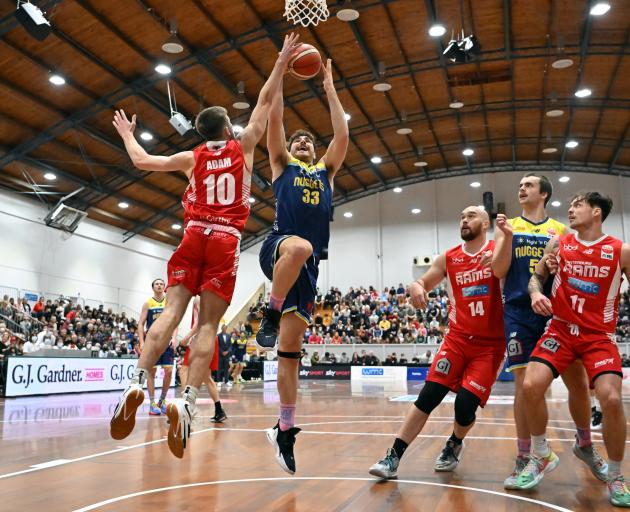 It did not always seem like the ideal mantra for the New Zealand Breakers as they lurched to a 5-23 season in which they again had to spend an entire campaign away from home.

But for Sam Timmins, it summed up neatly the resilience he and his team-mates had to find to cope with challenges on and off the court.

The Otago favourite is proud to look back on his difficult but rewarding debut season with the Breakers, as a development player who has now been upgraded to a full contract, in the Australian National Basketball League.

"Man, what a rollercoaster in a lot of different ways," Timmins said.

"For me, it was a net positive, as one of the assistant coaches would always talk to me about.

"It was a situation with a lot of highs and a lot of lows, but as long as you come out with a net positive, it’s a good thing, and that’s for sure what was the case with me."

Timmins had played big-time college basketball at Washington, and dominated the New Zealand league with the Nuggets.

But he knew stepping up to a classy Australian league would be his biggest leap yet, and that life as a development player rather than a regular starter would not be easy.

"So, mentally, I had to kind of find that balance between accepting the role I was in but also knowing, in the back of my mind, I had every capability to have a bigger role, and the goal was to earn one."

Timmins said it would have been hard to script the Breakers’ season.

They were bashed by Covid early in the campaign. Injuries hit. There was a 0-6 start, and setbacks every time a bright patch loomed.

All of it while the Breakers, like the Warriors, faced the longest road trip in world sport.

And it took its toll. Professional athletes are not robots.

Timmins grew up watching the Breakers and was delighted to join the organisation, but the unique pressures of the situation had an effect.

"It was the perfect storm. You couldn’t have made it up.

"There were times I felt really good about how I was doing in practice and when I got a chance in games, but there were other times I felt like I kind of let the situation get the best of me.

"Sometimes I probably felt a bit sorry for myself with the whole situation, being in Australia and the losses, and kind of didn’t work as hard as I could have for a bit.

"Once I snapped out of it, I would get back into it. That’s how life works.

"So I really feel I learnt a lot about myself, and about basketball."

Timmins, who turns 25 in a couple of weeks, found the second half of the Australian season easier as he was joined by his partner.

He ended up making 15 appearances for the Breakers, averaging 3.3 points and 2.3 rebounds in eight minutes with a season-high 17 minutes in a game against the Hawks for nine points, five rebounds and two steals.

The team had an option to add Timmins to the full roster for next season, and has taken up that option.

"There was no point during the season when I got on court and thought, ‘Uh oh, I’m out of my depth here’.

"That was cool for me because at the start of the season, in training, I was trying to learn the coach’s system and I was thinking, ‘Hang on, is this even the same sport I’ve been playing for the last decade of my life?’.

"That was just stuff he was teaching that I’d never been taught. Once I got over that learning barrier, it was great."

It must have been tempting to take some time off to refresh body and soul, but Timmins is a professional baller — and he loves the Otago Nuggets.

He went straight from Australia to Nelson to play the first of two road games for the Nuggets as they started their NBL campaign with a pair of losses with an undermanned team.

The Nuggets will have their three imports on deck for the home opener against the Saints tomorrow night.

If they adjust quickly, and Timmins gets anywhere near his wonderful 2021 form — he averaged 19.8 points and 4.1 assists, and led the league with 13.8 rebounds — Otago fans should be entertained.

"We’ll only have one or two practices before we go against the Saints, so it’s a massive challenge.

"But I’m looking forward to it. That’s why I’m back.

"I’m at the point where I’d quite like some sort of home base, and it would have been easy to stay in Auckland to just concentrate on the Breakers.

"But the Nuggets are a team with a special place in my heart, and I want to do what I can to hopefully bring a championship title down here."