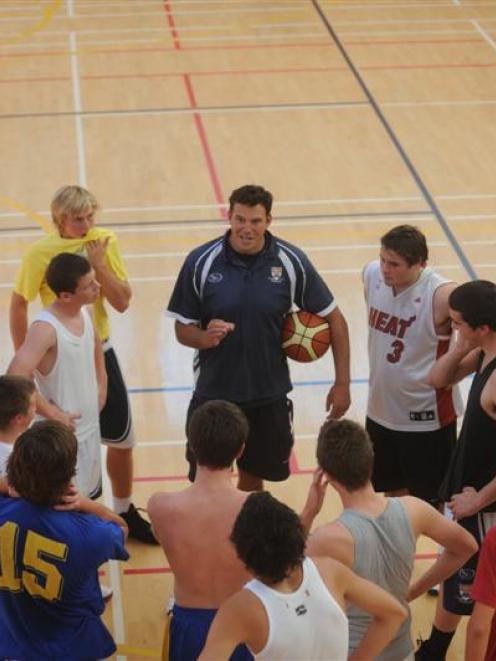 Otago Boys High School coach Brent Matehaere lays down the law to his senior side at a practice session in the school gym yesterday. Photo by Peter McIntosh.
It takes an equal amount of patience and passion to build a successful school basketball programme - and maybe the odd poached rugby player.

Otago Boys High School (OBHS) coach Brent Matehaere has helped turn the school from a nursery ground for All Blacks to one of the best basketball schools in the country.

The former Otago Nugget is in his 11th year teaching at the school and loves basketball.

He played for the Nuggets during the early 1990s, when the franchise use to regularly attract large crowds.

He draws on the same enthusiasm he harnessed during his playing days to inspire his pupils.

Success has not been immediate, but in the last couple of years OBHS has built a reputation as a feared basketball opponent.

The senior side finished fifth at the national secondary school championships in 2008, improving one place from the previous year.

Perhaps more impressively, though, is the list of athletes who have emerged from the programme and gone on to make national squads.

Junior Tall Blacks Morgan Nathan, Sam King and Tom Rowe played for the school last year, and Hayden Miller made the New Zealand under-18 side.

From this year's squad Chris Hood is in the under-18 side.

And there have been others like Luke Aston, who missed selection for national teams but has been picked up by the Breakers development squad, and outstanding guard Paratene McLeod, who Matehaere rates as one of the best players to have come through the programme in recent years.

"I guess we had a good bunch of athletes to start with," Matehaere said.

"If you put time into the kids they tend to respond.

"We've always been relatively strong but it has only been in the last couple of years that we've been doing well nationally."

The school has been blessed with some tall, athletic boys but most of them tended to gravitate towards rugby.

But the rugby paddock has been a fertile hunting ground for Matehaere.

"[Morgan Nathan] started in athletics and rugby and I converted him, and Tom Rowe started out as a rugby player."

Rowe played for the Nuggets in the National Basketball League (NBL) programme last year but with the franchise no longer in the NBL, and no guarantee it will re-enter the league in 2010, concerns have been raised there will be no pathways for promising players.

Matehaere believes there will still be plenty of opportunities for region's best players, but probably be outside Otago.

He was disappointed Basketball Otago decided against fielding a team in the 2009 NBL and linked up with others such as Nuggets assistant coach Gavin Briggs and former Nuggets coach Todd Marshall, in a last ditch attempt to save the franchise.