Isaiah Moss will be extending his Oceania stay. 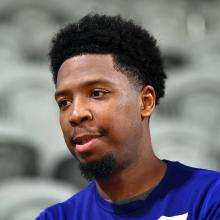 Isaiah Moss
The Otago Nuggets guard had initially planned to have a three-month stint away from home.

That is going to turn into 11 months.

The 24-year-old is not going home to Chicago at the conclusion of the National Basketball League.

Instead he will fly straight to Australia, where he has signed with the Brisbane Bullets for the Australian NBL season.

"But I’ve been enjoying myself.

"The guys here have made it easy for me to be so far from home and still feel so comfortable.

"I’m sure when I go to Brisbane it’ll be the same."

Moss has impressed for the Nuggets this year, the American import being among the NBL’s top players.

Notably, he has been elite from the three-point line, showing an ability to shoot both off the catch and the dribble, hitting 3.5 per game at 38%.

It was two weeks ago, after he dropped 31 points on the way to upsetting the Hawke’s Bay Hawks in Dunedin, that the offer came through.

He had been taking a nap when his agent woke him with a phone call telling him he had an opportunity with the Bullets.

Moss fills one of the three import slots on the Brisbane roster.

The league is a big step up from the level in New Zealand.

"I’m expecting it to be more competitive.

"I’m expecting to learn a lot from these guys I’m going to be playing with.

"They’re going to be much older than me, have way more experience.

"I’m going in with an open mind and hoping I can get better everyday."

He wants to come back to Dunedin.

Whether that will be in a playing capacity depends on where things end up.

But if he can make it work, tonight’s game against the Canterbury Rams may not be his final game in a Nuggets uniform.

However, he ultimately had his sights set on basketball’s biggest stage.

"Like I said when I came, I just want to continue to move up if I can. Just continue to grow on the court and off the court.

"If it’s God’s will, then hopefully I can get to the NBA."