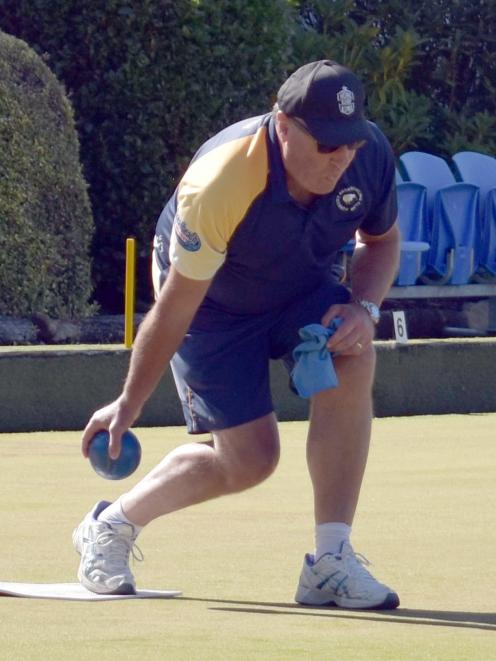 Former Otago rugby player Dave Callon delivers a shot for the Oliver Mason-skipped Forbury Park men’s triples team in the final of the Dunedin centre men’s triples against Taieri at North East Valley Bowling Club yesterday. PHOTO: WAYNE PARSONS
It was tight, it was tense, it was triples at its best.

Displaying superb leadership skills well beyond his 25 years of age, Mason skipped the the triples team consisting of former Otago loose forward and bowling convert Dave Callon (second) and Nigel Thompson (lead) to what was a hard-fought 20-14 victory. And one which could have easily swung the way of their finals opponents representing the Taieri club, skipped by Arthur Butler.

But they were to find that the Taieri team was not going to yield to any comeback hopes from Forbury Park and so began an intense game of catch and chase.

Despite then falling behind by four shots to trail 9-5 after seven ends, Butler dragged and dropped the jack into the ditch to pull back three shots on the eighth end and assisted his trio to secure two further shots on the ninth and 10th ends to regain the lead in the middle stages. Then, after a see-saw affair, his team was holding a 14-11 lead with four ends remaining.

Drawing three shots on the 15th end brought Forbury Park back into the game as Thompson and Callon come into their own, locking the Taieri trio out.

Callon was strong on the penultimate end, in which he set up two scoring shots to effectively shut Taieri out of the contest and hand his Forbury Park team a 17-14 lead going into the final end.

The three-shot deficit and pressure exerted by the Forbury Park trio on the Taieri trio was too great to overcome, as shots from the Taieri players went wide or fell short, and Butler’s attempt to force a tie-break to force an extra end went wide giving Forbury Park the title.

Mason stole bragging rights over his twin brother, Elliot, who now has two centre titles to the one achieved by his PBA international brother.

For Callon it may have taken 30 years, but winning his first centre title yesterday was a moment to savour. It was a fine moment,too, for Thompson, who won his second Dunedin title to go with his one national and eight regional titles he won with the Nelson Centre.

Although coming out on he wrong side of the ledger, Butler was full of praise for the trio from Forbury.

"They were just more consistent and kept coming back at us," he said.