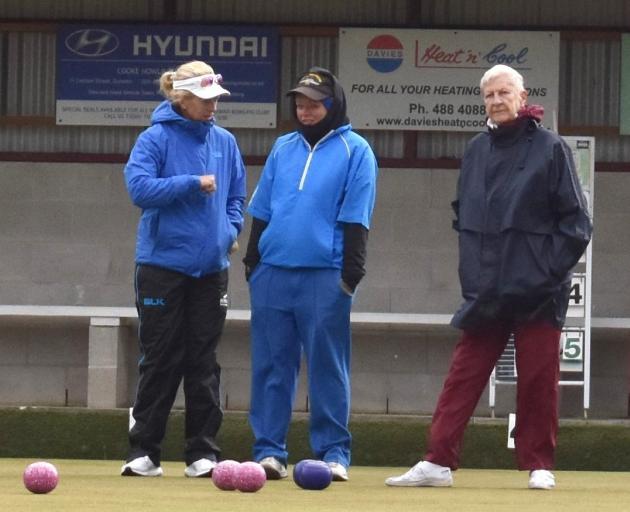 North East Valley pair Bronwyn Stevens (left) and Sarah Scott discuss options on the head as Tainui's Priscilla Holt (right) looks up the green at the bowl being delivered from playing partner Kathleen Harrington during the champion of champions women's pairs at Balmacewen Bowling Club on Sunday. PHOTO: WAYNE PARSONS
Conditions were brutal and the North East Valley pairing of Sarah Scott and Bronwyn Stevens unforgiving on their way to winning the Dunedin Centre champion of champions women's pairs title at Balmacewen on Sunday.

After a first-round scare against the Green Island pairing of Jan Hall and Lesley Dabinett that took two extra ends to decide, Scott and Stevens unleashed some impressive play in remaining games to claim the title in conditions that tested their stamina.

The Tainui pair Priscilla Holt and Kathleen Harrington won a string of close encounters on the other side of the draw to make the final.

Not until the fifth end, when Scott and Stevens held a 5-0 lead, were the Tainui pair able to put numbers on the board, when they drew two to close the game up.

Shots were exchanged over the following two ends, but it all came unstuck for Holt and Harrington on the eight and ninth ends, as Scott and Stevens scored back-to-back fours to go to a 14-3 lead.

Holt and Harrington fought back bravely, but the pressure on the head from Scott put paid to any chance of them fighting their way back into the contest.

The North East Valley pair claimed the title with an 18-9 victory when their opponents conceded at the conclusion of the 16th end.

Holt, who finished the final with a muscle injury, praised the play of Scott and Stevens.

“I'm frozen stiff. But those girls were excellent.

‘‘They reminded me of me in my younger days,” she said.

“You had to focus and hang on. You either got the right gust of wind or the wrong gust of wind,” she said.

“It was pretty trying out there but we soldiered on. It was hard to put the numbers on the board and remain consistent.”

Sunday's victory continued a golden run for the North East Valley pair. They began the season with victory in the prestigious Casino pairs in October and last week finished runner-up in the national women's pairs championships.

The victory on Sunday earned them entry in the national champion of champion pairs final in July.

The title on Sunday was Scott's eighth Dunedin Centre title and Stevens’ first.

The final of the men's champion of champion pairs will be played at Kaikorai Bowling Club on Friday at 5pm, between North East Valley (Keanu Darby and Roger Stevens) and Kaikorai (Nigel Birkbeck and Jonty Horwell).