Reputations counted for little as the form of tournament favourites took a u-turn when play got underway on the second day of the Speight's North East Valley 10,000 today.

In the first rounds of section play on Friday all the signs pointed to Wilson gaining a third consecutive title at the tournament, but when play resumed on Saturday morning the form he brought to the tournament on Friday was missing in action.

In the first round of the day he went down to Seamus Curtin (Wellington) 25-18, then in the next round lost to 2009 tournament champion Shaun Scott (Central Otago) 25-11. The win for Scott coming as a shot in the arm as he lost all his earlier round games, including a third round loss to tournament rookie Sam Cooper 25-19.

Wilson's loss putting him in damage control in order to become one of the three players to make it out of the section for the post section encounters. His wake-up call coming at the expense of an undefeated Andrew Kelly (Christchurch), whom Wilson extracted revenge from his losses to Curtin and Scott, with a one-sided 25-10 victory to keep his hopes alive of progressing to post section.

Curtin along with Tony Grantham (Auckland) will begin the final two rounds of section play today (Sunday) as the only undefeated players at the tournament.

Other reputations to take a knock on day two were those of last year's runner-up Ryan Bester (Canada), and world champion Shannon McIlroy.

The fourth round was also a fall from grace for three-time tournament champion McIlroy (Nelson), who clawed his way back to lock the game up at 24-all after 30 ends, only to lose an all or nothing 31st end to local bowler Roger Stevens, who took the match 25-24.

The loss putting performance pressure on McIlroy in section three, as any further loss could well place him dependant on differential in order to progress to post section.

Differential may well decide the players who will progress from section one also, that gave witness to three consecutive losses to three-time champion Mike Kernaghan dropping three consecutive games. The group his headed by Blackjack Jamie Hill (Auckland), who's only loss came in the second round on the first day to Scottish international Ryan Burnett. But dropping two games on Saturday has lessened Burnett's odds of making it through to post section. 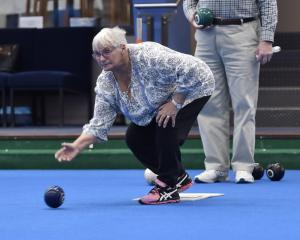