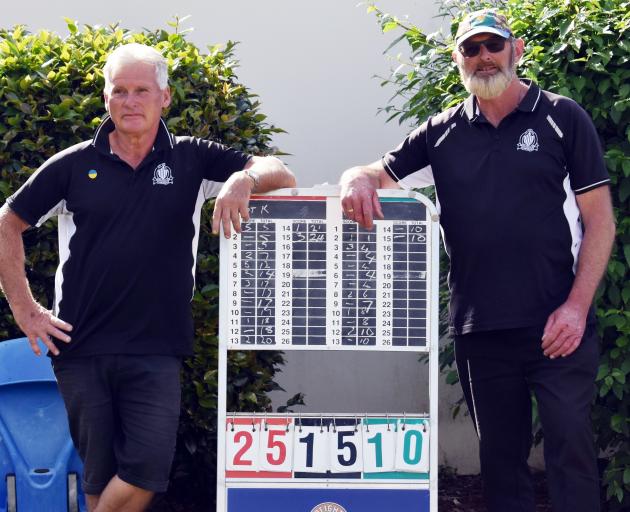 Wilson won through to the final of the champion of champion singles on Saturday, beginning play at 9am. And after it was decided to play the final at a later date at 6.30pm, he then spent the next three hours playing for a fours team in a St Kilda club tournament.

There were obvious signs of fatigue from Wilson as he constantly drew weight on the head and complemented the superb draw play from his lead, Owen Bennett, to constantly deny the Fairfield duo of Gary Thornley and Rodger Paul a chance of getting into the match.

While the St Kilda pair’s 25-10 victory may appear lopsided on the scorecard, it does not reflect that the Fairfield duo remained competitive throughout, only to be denied by Wilson sending down some absolute heartbreakers to keep Fairfield locked out of the contest.

St Kilda got off to the best possible start, scoring a five on the first end, but Fairfield hit back over the second and third ends to lock the game up, but then had to witness Wilson hone in on the jack and take control of the head, to score big numbers and hold a 17-4 lead after just seven ends.

Undaunted by the score, the Fairfield duo inched their way back into the contest to win the next three ends, but with little room to move on the head, numbers remained low as it trailed St Kilda 17-8 after 10 ends. The 11th end all but sealed Fairfield’s hopes of mounting a recovery.

Holding a four-shot advantage, Wilson with his third and final bowl sent down a pearler, its trajectory sneaking through a narrow gap to come to rest against the jack to steal the shot and deny Fairfield’s hopes of mounting a comeback as Wilson took St Kilda out to an 18-8 advantage.

The end virtually sealed the Fairfield duo’s fate, as Wilson and Bennett maintained their tight grip on the game to win 25-10 in 16 ends.

Wilson was full of praise for the fight the Fairfield pair put up in the final.

"Gary [Thornley] played some big bowls and Rodger [Paul] played some beautiful shots," he said of the pressure he and Bennett found themselves playing under throughout.

"Owen [Bennett] played superb and I managed to get one or two in there when we were in a little bit of trouble."

He praised the work of Paul, who from lead played consistently with good weight no matter the length of the head.

When asked of turning the game on its head on the 11th end he said: "That’s why I get paid the big bucks, I guess."

Fairfield skip Thornley was philosophical after the match.

"We would have liked to turn up and give them a wee bit more of a competition," he said.

"We’ve been beaten by two better bowlers and that’s bowls."