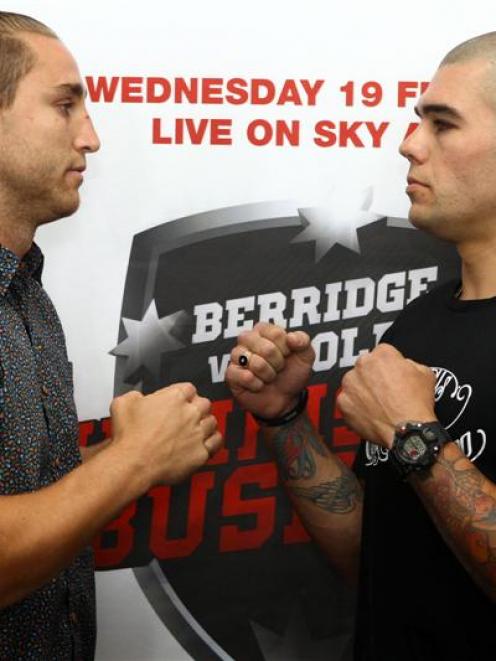 New Zealand boxer Robert Berridge (right) and opponent Kerry Foley prepare for their February 19 bout. Photo by Photosport.
Robert ''The Butcher'' Berridge and Kerry Foley have a score to settle.

In 2011, they battled to a controversial draw, and next Wednesday they will get the opportunity to set the record straight.

The Albany-based Berridge will put his Pan Asian Boxing Association light heavyweight title on the line when he co-headlines the main event on the Daniel Geale v Garth Wood undercard at the Hordern Pavilion in Sydney.

Berridge and Foley were in Dunedin recently, and while there was some light-hearted banter coming mainly from Foley, it was obvious both were in fight mode.

Berridge (29) was quietly confident and determined not to leave the fight up to the judges.

''Since my only loss 10 fights ago I have finished every fight, including two in Australia, and that's exactly what I will do to him,'' Berridge said.

He was convinced he beat Foley in their first battle at cruiserweight.

In that six-round fight, Berridge was rightly deducted a point for an elbow in the fourth round, before knocking Foley down in the fifth.

Foley got to his feet after a slow eight-count by referee Anthony Shipley, who then helped Foley stand upright from a hunched-over position.

Berridge said this time Foley had stepped in as a mandatory challenger when his original opponent, Trent Broadhurst, broke his hand.

''I have probably got more to lose than him given that he has taken the fight on about five weeks' notice. He will feel he has some rights to amend, but I am going to bash him.''

Since his professional debut in 2009, Berridge has amassed 22 wins from 24 fights, including 18 knockouts.

On the back of October's lethal left hook finish of Argentinean Mariano Riva, he won the PABA title and the WBO Oriental title in power punching fashion five weeks later when he stopped New Zealander Daniel Mackinnon in a 10-round brawl.

He said he was not looking past Foley, but his dream was to be a world champion and become the first person to bring a world title fight to New Zealand.

Judging by his 14 wins from 16 fights, including 12 knockouts, Foley is no easybeat, although his recent inactivity from boxing definitely makes him the underdog.

The 26-year-old Australian goes into the fight sure of an upset after seeing Mackinnon drop Berridge in the eighth round.

This will be his first boxing fight since the draw with Berridge, but over the past year he has dabbled in mixed martial arts, had won all three fights by knockout, he said.

His last fight was eight weeks ago and he had been eyeing up a return to boxing for about a year, with Berridge always on the horizon.

''I am stronger, quicker and have better head movement, which is something I don't think he has any of at all,'' Foley said.

The PABA is an organisation that encompasses Central Asia, Oceania, Pan Pacific, South East and Far East nations and Eurasia.