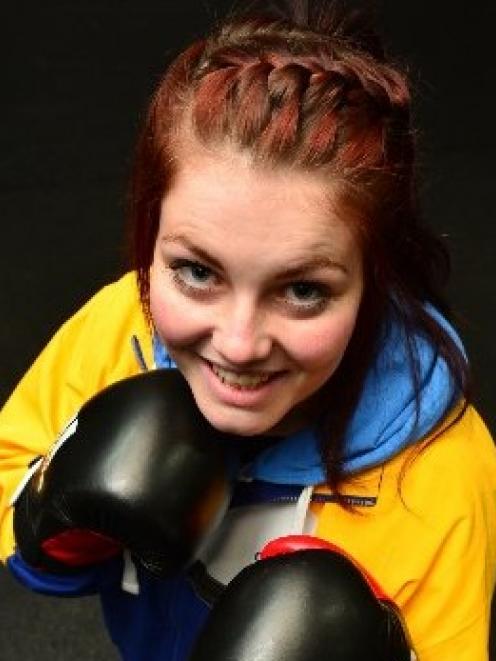 But when she is not listening to some tunes, on Facebook or snuggling up to her cat, she is most comfortable when she is in the boxing ring.

The Dunedin fighter will put her skills to the ultimate test following her selection for the New Zealand boxing team.

Wilson (18) was picked in an 11-strong team to face Poland in September, but may instead compete at a world championship event in Bulgaria, which is hosting the world youth and junior championships in the same month.

She will become only the second woman from Otago to box internationally for New Zealand.

Wilson, in her final year at Queen's High school, said she felt ''incredibly proud and honoured'' to gain national selection.

When she joined the Olympic gym two years ago, representing New Zealand was a distant dream.

''Dad wanted to do a bit of cardio and I just tagged along,'' Wilson said.

Wilson will attend a national training camp in Rotorua this weekend, and another before she competes overseas.

She is excited about being put through her paces, to get a gauge of where she is at before her international debut.

Standing at about 162cm, with sparkling blue eyes and a beaming smile, Wilson looks nothing like the stereotypical boxer.

That is, until she climbs into the ring. With near faultless technique, she bounces on her toes and snaps her punches with fast, heavy hands.

Wilson said she felt fortunate to have raw power. Not all boxers had it, and it could not be taught.

With a record of seven wins and seven losses, Wilson has got better with every fight. Earlier this year, she beat New Zealand team-mate Natalie Stuart (21-12), and last year put two standing eight counts on Queenstown's Nicola-Ann Kay before Kay's corner threw in the towel.

She said the Kay win was her most rewarding because she finished it early in the first round. So, it is no surprise her favourite boxer is Mike Tyson.

''I just loved the way he won and have definitely modelled myself around him.''

Wilson was second in the 69kg youth section at last year's national championships, and was a member of the Otago team that beat Canterbury. She trains six days a week, up to two hours a day, and has sparring sessions against boys, including younger brother Mitchell.

Wilson said Mitchell was a big inspiration for her. She also credited Olympic boxing coach Tony Maitland for her progress.

Remarkably, Wilson has been training and boxing since February despite suffering from underactive thyroid issues, including glandular fever.

She said she was almost back to full fitness and was ready to fight at either her usual 69kg or more suitable 75kg.

Otago Boxing Association president Bryan Usher said Wilson was an inspiration and a pioneer in Otago boxing. He said former Otago representative Dawn Chalmers boxed for New Zealand, but that was when she was representing Canterbury.

Wilson, who would need to raise about $5000 for her trip, succeeded because she had a huge passion for the sport and listened to her coaches, Usher said.

Maitland has been training Wilson since she started. He described her as a ''tough wee nugget'' who was a breeze to train.

He said her dedication was enormous and she had the potential to stay in the national team for a long time.