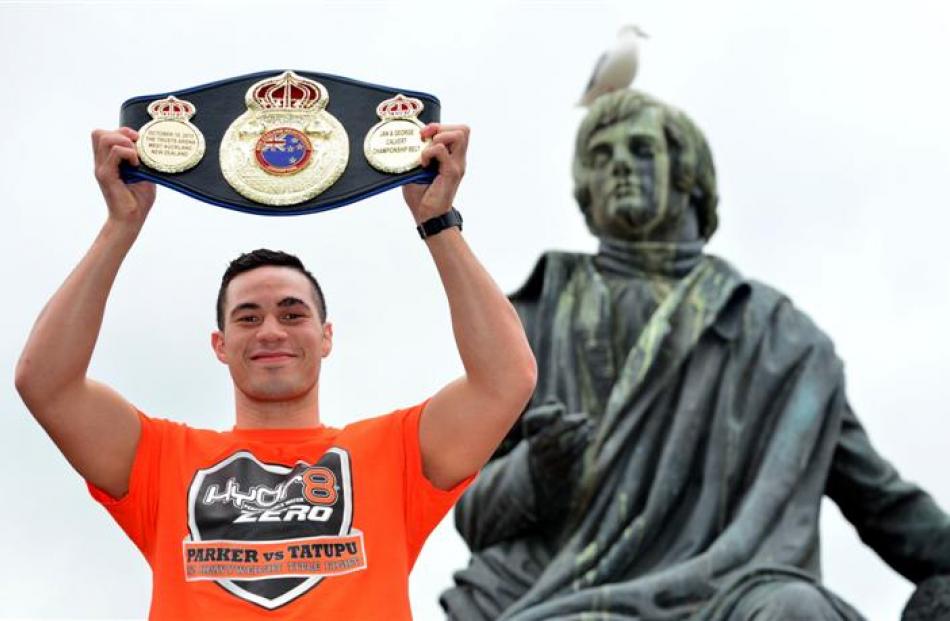 Joseph Parker shows off his heavyweight championship belt in the Octagon. Photo by Peter McIntosh.

What a difference a week makes.

Joseph Parker's immediate boxing career appeared in doubt when he sustained a nasty gash above his eye in the fight against Afa Tatupu.

It was 4cm-5cm long, cut to the bone and made his left eyebrow look like a mangled mess.

Parker's next fight has been postponed until March, but his brow - which required 14 stitches - appears to have made a remarkable recovery.

Parker (21), who was in Dunedin this week, was always confident the gash would heal.

Parker is not familiar with his next opponent, Brazilian heavyweight champion George Arias, but will start ''analysing his weaknesses and strengths'' when he gets to Las Vegas next week.

Being unable to spar was not an issue because it was something usually done closer to the fight, Parker said.

He was looking at Arias as a step up. The Brazilian has had 64 fights and is on a 15-fight winning streak.

For Parker, the year has been about taking small steps and finding his way in the professional ranks.

It was during the Francois Botha fight earlier this year he truly felt like a professional boxer with real potential.

While Arias (39) has won 53 fights and has been undefeated since 2008, the calibre of his opponents since then is questionable.

However, Parker's coach, Kevin Barry, is adamant the Brazilian is a perfect fit.

He said Arias had been a personal trainer his whole adult life, had gone the distance many times, had a solid chin and had finished his past seven opponents inside three rounds.

''This fight was always designed to be Joseph's biggest test so we can see how much progress he has made.''

Barry said he would like Parker to have about three years under his belt before he fought some of the top American heavyweights, such as Chris Arreola or Deontay Wilder.

Arreola (32) is a hard hitter with 33 wins from 36 fights, while Wilder (29) is undefeated in his 29 fights and is seen by many as a top American prospect in a division crying out for decent heavyweights outside Europe.

Barry said Arreola was in about his eighth season as a professional and Wilder his sixth.

''Joseph has been a pro for a year so it's important we do not get too far ahead of ourselves.''

Barry said Parker would see a plastic surgeon when he got back to Auckland and again in Las Vegas.

He wanted to be absolutely certain the cut was well and truly on the mend, but going by how well Parker had healed within a week, Barry was quietly confident it would not be an issue down the track.