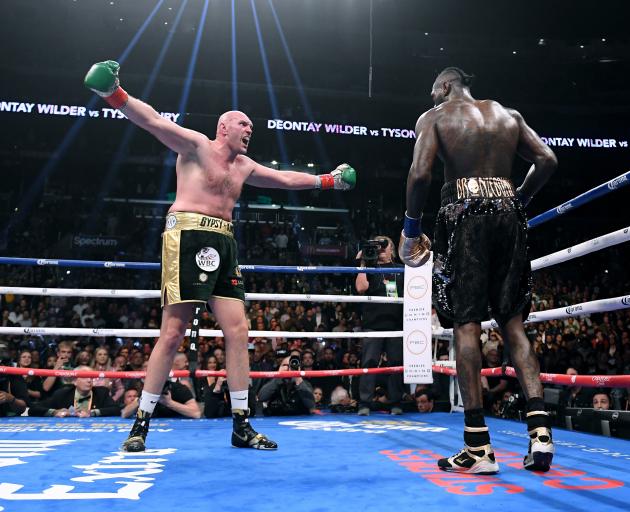 Tyson Fury (left) taunts Deontay Wilder during their WBC Heavyweight title bout. Photo: Getty Images
They say that Tyson Fury, the self-styled Gypsy King, was born travelling, talking and fighting, and he certainly lived up to that reputation with an extraordinary performance in drawing his heavyweight title fight with Deontay Wilder after being knocked down twice today.

Wilder retains his WBC belt and most would say that's fair after flooring Fury in the ninth and 12th rounds at the Staples Center in Los Angeles. It's also probably fair to say that Fury, 30, dominated Wilder after the first couple of even rounds and was perhaps unlucky not to edge it.

Fury succeeded with a higher percentage of jabs, body shots and power shots. The Englishman made Wilder look limited at times, the American content – or only able – to walk forward trying to set up that bazooka of a right hand. It did the damage in the ninth round, Fury falling for the second time of his professional career, after a glancing blow to the top of his head.

He didn't look troubled once on his feet, but how he managed to get back up after being knocked down in the 12th is anyone's guess.

He had scored against Wilder with a left hand, right hand combination, only for Wilder to respond with a crashing right hand to the side of Fury's head, which he followed by a left hook to the other side.

Down Fury went. And, like a mythical giant waking from a slumber, he somehow got up and beat referee Jack Reiss's count. 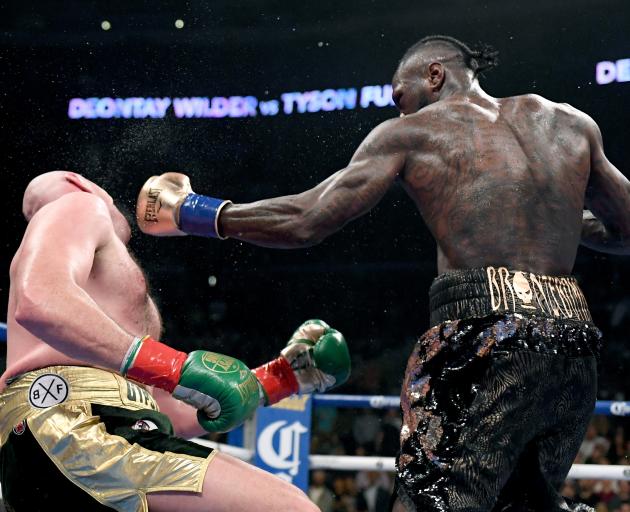 Tyson Fury was knocked down twice but had the better of the rest of the fight. Photo: Getty Images
Given Fury's domination and Wilder's knockdowns, it was always going to be a hard fight to score and one judge scored it 115-111 to Wilder, one 114-110 to Fury and one 113-113.

"I think with the two knockdowns I definitely won the fight," Wilder said afterwards. "We poured our hearts out tonight. We're both warriors, but with those two drops I think I won the fight. I came out slow. I rushed my punches. I didn't sit still. I was too hesitant. I started overthrowing the right hand and I just couldn't adjust.

"When you're at each other and you have a great fight, we give each other all we've got. At the end of the fight that's what it's all about. He was just tell me great fight, he loves, and thank you for the opportunity. We're the best in the world. The respect was mutual."

But that doesn't really tell the story of Fury's achievements in getting back into the ring after more than two years of near inactivity after shocking Wladimir Klitschko in Germany at the end of 2015.

Fury's struggles with drugs, alcohol and mental health are well known. He also blew out to more than 170kg, so to be able to go 12 rounds against one of the most feared punchers in the sport was an extraordinary achievement.

His awkward style and constant feints had Wilder struggling to find the target for much of the night, apart from his two notable successes.

The father of four, with one on the way, will make good money from this fight and there is already talk of a re-match.

Where this leaves the unification of all the heavyweight belts is anyone's guess, though. The assumption was that WBO, IBF and WBA champion Anthony Joshua would fight the winner – probably Wilder – at Wembley in April, and that still may be the case.

But Fury, the self-styled lineal champion after he "beat the man who beat the man", still has claims to that unofficial title. He's a fascinating character and his support from ringside drowned out that of Wilder's.

"We're on away soil, I got knocked down twice, but I still believe I won that fight. I'm being a total professional here. I went to Germany to fight Klitschko and I went to America to fight Deontay Wilder. God bless America. The 'Gypsy King' has returned.

"I hope I did you all proud after nearly three years out of the ring. I was never going to be knocked down tonight. I showed good heart to get up. I came here tonight and I fought my heart out."