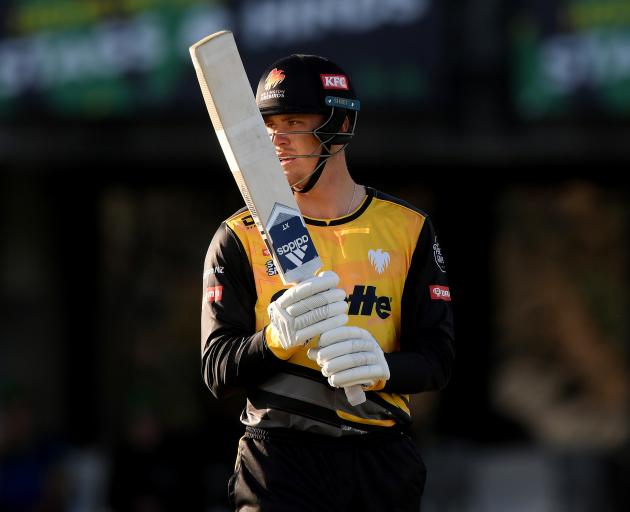 Finn Allen smashed 128 off just 59 balls against Otago. Photo: Getty Images
The Wellington Firebirds made sure of this one, and they did it in record-breaking fashion.

Two days after the Otago Volts chased down the 340 runs they set them at the Basin Reserve, Wellington scored 427 for eight for the Volts to chase in their Ford Trophy match yesterday at the same ground.

It was a record score in the New Zealand one-day competition and while the Volts put on an impressive score themselves, they did not get near their target.

They were bowled out for 345, ending their campaign in the process.

Otago had entered the game in third place, courtesy of Friday’s successful chase.

However, it was just two points ahead of Wellington on the table, making the match essentially a quarterfinal.

The Wellington score beat Central Districts’ 417 against Northern Districts in Hamilton in 2013.

It was also the 17th highest score in any List A one-day game around the world.

Opening duo Finn Allen and Tom Blundell did the damage, scoring 128 and 151 respectively.

He scored his century off 50 balls, equalling Peter Fulton’s record for the fastest century in the competition’s history.

In an innings of pure carnage he hit 11 sixes and nine fours as he carted the Otago bowling attack all around the ground.

The Firebirds were on 191 when he was dismissed in the 21st over, but were well set-up to explode.

At the other end Blundell scored at around a run a ball his whole innings, providing support for Allen and then pushing through to a big score of his own.

Michael Bracewell chipped in with a handy 47, before Jamie Gibson hit a rapid 44 off 21 of his own.

It made for some ugly bowling figures from the Volts end.

Michael Rae, Mitchell McClenaghan, Jacob Duffy and Anaru Kitchen were all taken for 75 runs or more.

Meanwhile, Nathan Smith went for 62 runs off his six overs.

Only Michael Rippon was able to offer some respite.

He took two wickets for 52 off nine overs, snaring the wickets of Jakob Bhula and Bracewell to somewhat stall the progress after the rapid start.

The massive total left the Volts little option but to come out swinging.

However, unlike Friday, this time the wickets fell regularly.

Hamish Rutherford played one on from Logan van Beek to depart for seven in the second over.

He was followed not long after by Neil Broom and Nick Kelly for nine and 23 respectively.

It left the team at 49 for three after five overs.

The middle order offered some sterner stuff though, Rippon showing his all-round class with a well-worked 84 off 68.

Kitchen and Dale Phillips managed 40 and 62 as well, but when Phillips was bowled it left the Volts still well-short at 242 for six.

Smith hit a quick-fire, unbeaten 50, but wickets fell around him and the team finished 82 runs short.

In other games, Canterbury beat Auckland by 13 runs in a contest reduced by rain to 29 overs a side, its total of 238 for five powered by Black Cap Tom Latham’s 118 off just 79 balls, and will advance directly to next weekend’s final after claiming top spot.

Northern Districts beat Central Districts by five wickets and will play Wellington in the elimination final.